FC Dallas vs Minnesota United – FC Dallas is off to a good start this season. They’ve been able to keep it going by continuously putting on unbeatable performances. They are in third place on the table with 22 points and a strong offensive and defensive line-up.

In their most recent league match, FC Dallas lost 2-1 on the road at the Vancouver Whitecaps. Before suffering the aforesaid defeat, they had gone nine games without losing in the league. As a result, they’ll be trying to win to get back to their winning ways.

Minnesota United, on the other hand, has had an average start to the season. Instead of progressing as a result of this, they had dismal results, resulting in their placement outside the table’s safe zone. They are average on both the offensive and defensive sides.

Minnesota’s most recent league match was a 1-1 draw at home against the Los Angeles Galaxy. They now have a four-game unbeaten record in the league thanks to their draw. Three of the outcomes were negative.

Both FC Dallas and Minnesota have won five of their last 12 meetings. Their most recent meeting finished in a 0-0 tie. FC Dallas has failed to win at this site versus Minnesota.

Dallas’ home runs have been particularly remarkable recently. They have won their last six home games in all competitions. In addition, they are yet to lose at home this season.

Minnesota, on the other hand, has been on a three-game losing streak on the road. In each of their last two road games this season, they have allowed two or more goals.

Furthermore, FC Dallas has a perfect home record versus Minnesota in the history of this rivalry. As a result, we believe FC Dallas will win this match. 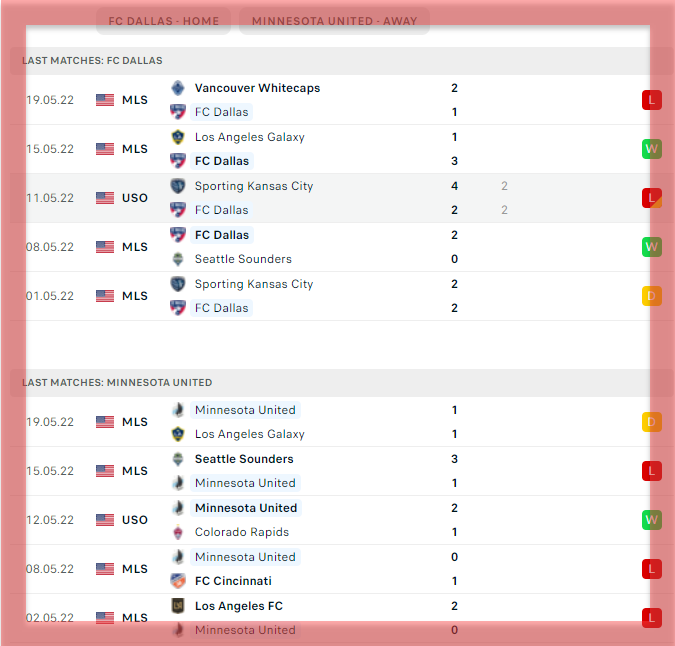 Our Prediction : Home To Win