FC Copenhagen vs Aalborg – Copenhagen is hell-bent on finishing first in Superliga this season. If they win this season, they will earn their 14th Championship trophy. They are unbeaten in their past four games, indicating that they are in good form. With only one match remaining in the Championship round, the club has a good chance of winning the title this season. The team has 65 points thus far.

Copenhagen’s last match was against Randers. Randers did not score in the encounter, while Copenhagen scored two goals, giving Copenhagen a two-match winning streak. The game ended with an FT score of 2-0.

Aalborg‘s form has been inconsistent throughout the Championship matches. In the last six games, they have failed to win. Aalborg is tied for fifth place in the Conference League and needs to win this match to qualify for the Conference League playoffs. With 45 points from six matches, they are now ranked fourth in the Championship round standings.

Aalborg’s last match was against Brondby. Brondby scored three goals in the contest, while Aalborg only managed one, resulting in a 1-3 FT score.

Copenhagen is unbeaten in its last four games, including two wins in a row. AaB, on the other side, has failed to win in their last six games.

Copenhagen has the benefit of playing in their own stadium, where they have won four of their last five games. Aalborg has lost their last three games. In the last two games, though, the side has scored over 1.5 goals. 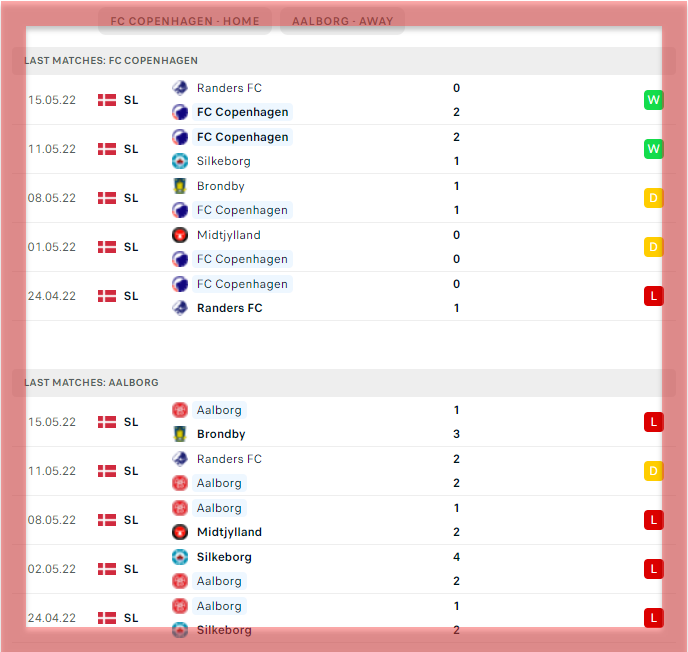