FC Cincinnati vs New England Revolution- FC Cincinnati has been performing well in recent matches. After a few games, the team’s performance had deteriorated. They have, however, returned to their winning ways, winning their last four games in a row. In two of the games, the side has kept a clean sheet. With 19 points from their matches, the club has moved up the standings to fourth place in the eastern conference table.

Following a string of dismal performances, the New England Revolution have improved their game, going undefeated in their last three games. The team has three wins, three ties, and five losses from eleven games played. With 12 points from their games, New England is now ranked tenth in the Eastern Conference.

The New England Revolution’s most recent encounter was against Atlanta United. Both teams scored two goals in the encounter, which ended in a 2-2 FT draw.

In the forthcoming encounter, Cincinnati and New England will compete for another win to extend their unbeaten record. Cincinnati has won its last four games in a row, while the New England Revolution has gone three games without losing.

After their last home game versus Toronto, Cincinnati has added to their win total. Cincinnati has already won two games at home this season, including the most recent one. In contrast, New England has not had the success they had hoped for in their away games. In their away encounters, the team has not won a single game.

According to the records, Cincinnati has a better chance of winning than New England. Both clubs have scored in their most recent matches and should contribute to the scoreboard in this one as well. 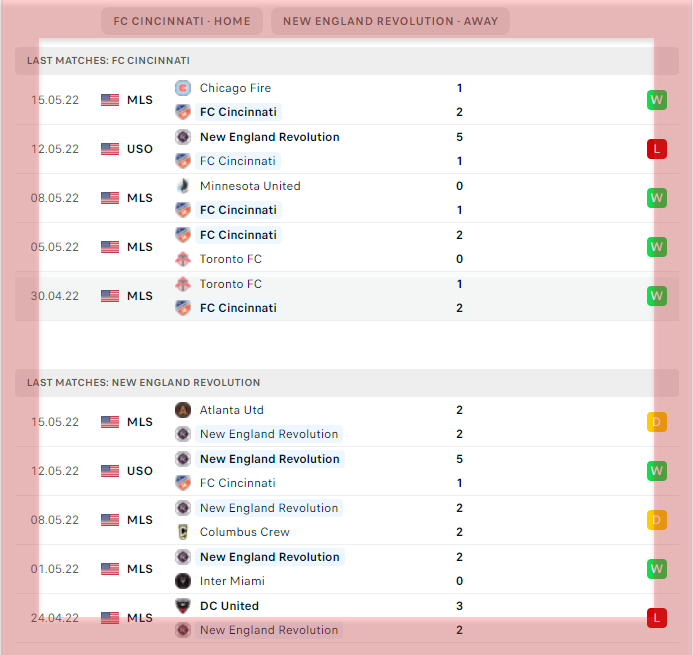