FC Basel vs Lugano – The Swiss Super League’s 36th round begins on Sunday, with FC Basel hosting Lugano, who are battling for a top-three spot.

These two teams will face off at St. Jakob-Park in a match that promises to be interesting. With 59 points from 35 games, FC Basel is in second place in the standings.

They were victorious 14 times in the league while losing four times. The hosts have the highest number of draws this season (17), and they have already won three straight games.

In their previous match, the hosts drew for the third time in a straight against Servette, 0-0. Basel’s recent offensive struggles have continued, with the team failing to score in three of their previous five league games.

They haven’t won a league game in the last four league seasons. Lugano, on the other hand, is in fourth place in the standings with 54 points.

They won 16 of the 35 league matches they played, tied 6 times, and lost 13 times. They have won the Swiss Cup for the first time since 1993 and have been in fantastic form since then.

Lugano was able to transfer their Swiss Cup success into the league, winning 2-1 over league leaders Zurich earlier.

They have already qualified for the Europa Conference League qualifiers due to their seven-point margin over fifth-placed St. Gallen.

Meanwhile, Lugano has lost their past two head-to-head and has not won against this opponent in their last four matches. They do, however, come in on the heels of two straight league victories and a five-game unbeaten streak. This Sunday, we believe a draw or an away win is most likely. 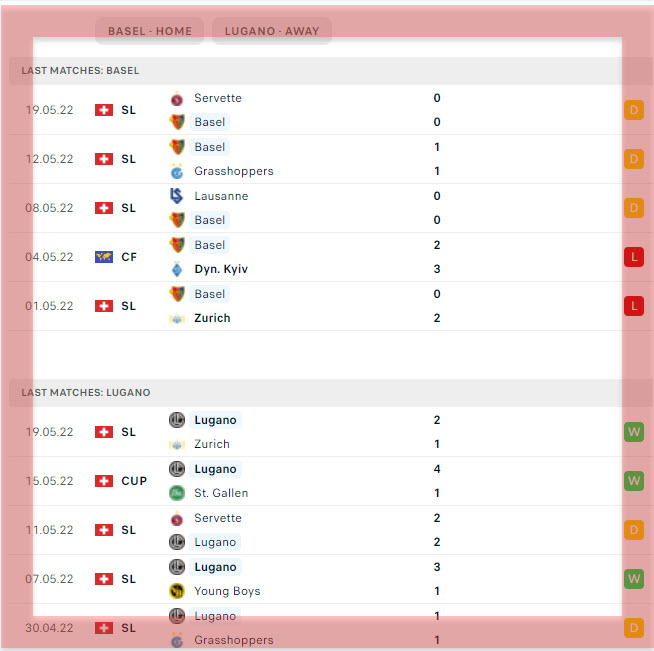