FC Andorra vs Cartagena – Andorra is currently in excellent shape and is vying for a position in the top division. Most of their recent games were victories, and they consistently scored lots of goals.

Cartagena is clinging to fifth place for dear life and is determined to avoid losing ground on Sunday. A loss this weekend might be disastrous because neither club is far off from the other in the standings.

Andorra are unquestionably among the top teams in the Spanish second division based on recent results, despite recent struggles with their home defense.

Further, it should be mentioned that they were one of just three teams in the league to score more goals than they did, and they were also able to maintain this offensive form in front of their own fans.

Cartagena, meanwhile, needs a surplus of just three points to catch up to Las Palmas, who are now in second position.

Of all the participating teams, they scored the most goals, and they did so frequently on the road as well. As things stand, this Sunday’s game between the two teams is likely to be a high-scoring battle.

This is the first time the two teams are going head-to-head, and Andorra not only managed to win three games in a row, but they also scored eight goals along the way.

Additionally, they defeated Lugo 4-0 at home the previous game week. Cartagena, on the other side, hasn’t lost many games lately, and they’ve scored lots of goals while doing it.

They have the unusual distinction of being a team that excels on offense yet struggles defensively. And as a result, the majority of their games are typically goal-fests.

It goes without saying that this Sunday’s matchup between these two tenacious teams at the Estadi Nacional will be one of those. This weekend, both Teams to Score and Over 2.5 Match Goals both appear to be excellent bets. 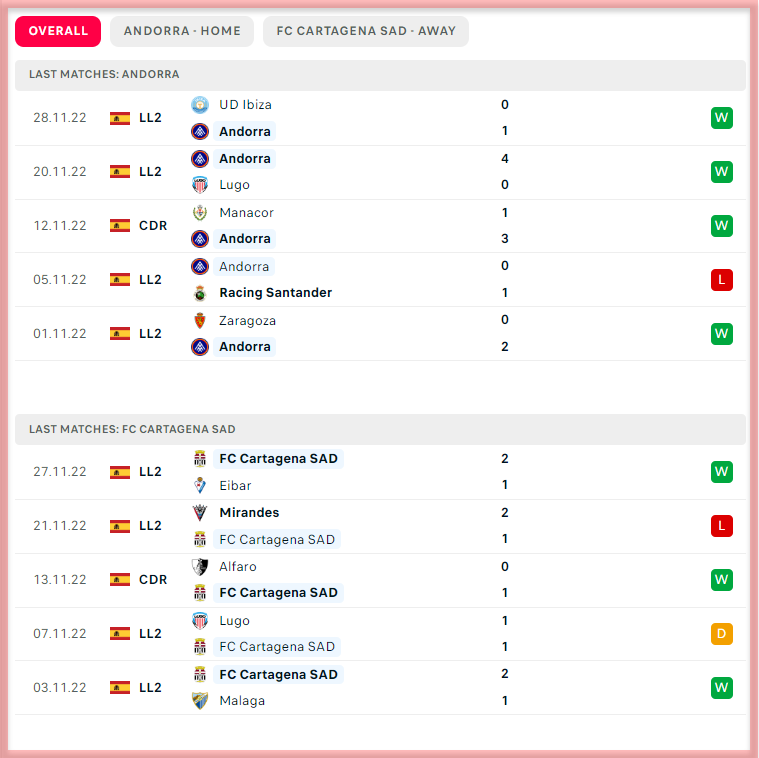