Fatih Karagumruk vs Alanyaspor – Alanyaspor has been in mediocre form since the start of the season. They’ve been attempting to locate a safe zone and have finally arrived at the edge of one with only one game remaining in the campaign. Their hopes, though, are still alive.

Alanyaspor won 3-0 over Gaziantep at home in their most recent league match. They have now gone three games without losing this season thanks to the aforesaid win. Another win would make it four in a straight, increasing their chances of securing a safe zone berth till the Basaksehir-Trabzonspor match concludes.

In their most recent league match, Karagumruk drew a dismal goalless draw on the road against Fenerbahce. In any case, they have already gone six games without losing in the league.

This will be the first of four meetings between these two teams. Alanyaspor won one, tied one, and lost one of their three head-to-head matches with Fatih Karagumruk. The reverse match resulted in a 1-1 tie.

Karagumruk’s recent home run looks spectacular. They have won all seven of their league games at home this season. Six of these were also positive examples.

Alanyaspor, on the other hand, has been in good form on the road recently. They have scored two or more goals in five of their last eight road league games.
Despite Karagumruk’s good home record, we’ll support Alanyaspor to win this match. 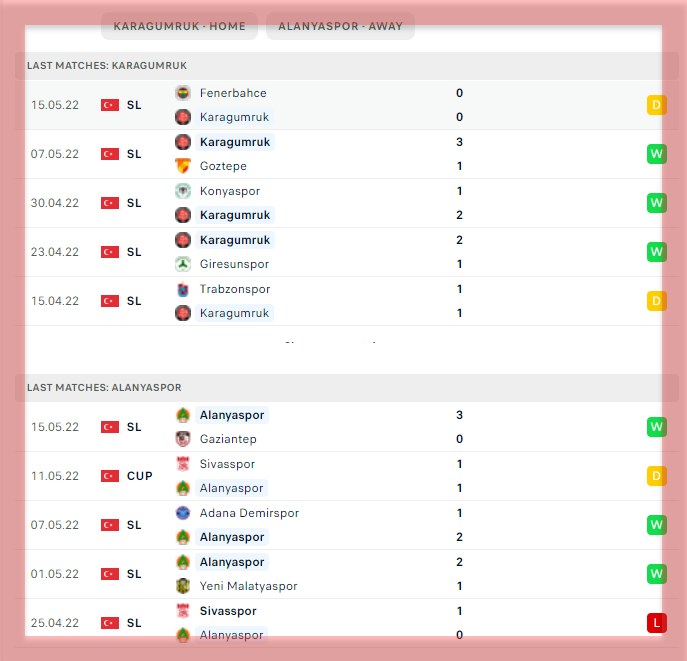