Famalicao vs Sporting Braga – After winning its last three games in a row, Braga wants to end the season with another win in Famalicao while on a road trip. This Sunday, these two sides will fight at Estadio Municipal de Famalicao.

With 65 points from 33 games, Sporting Braga is in fourth place in the standings. They won 19 times in the league, tied 8 times, and only lost 6 times. The team from the other team has already made it to the Europa Conference League, and they have won their last seven league games in a row.

The away team hasn’t lost in 7 league games after beating Arouca 1-0 at home, but they didn’t score until very late last Sunday. Braga has kept five straight clean sheets in the league, but in each of those games, they have only scored one goal.

On the other hand, Famalicao has 36 points and is in the 12th spot on the table. Out of the 33 games they played, they won eight, tied twelve, and lost thirteen. They have nothing to play for on Sunday night because they can’t make it to Europe and won’t be relegated.

Fans of Famalicao will want the same result as the last time, which was a 2-3 win over Belenenses in the Primeira Liga. In their last six games, their defense has been broken into five times, letting in eight goals.

Famalicao, on the other hand, hasn’t lost in their last two league games at home. But they haven’t been able to beat this opponent in any of the matches so far.
We think it could be a close game, and based on their last two games, it’s safe to bet on Draw no bet for the away team. 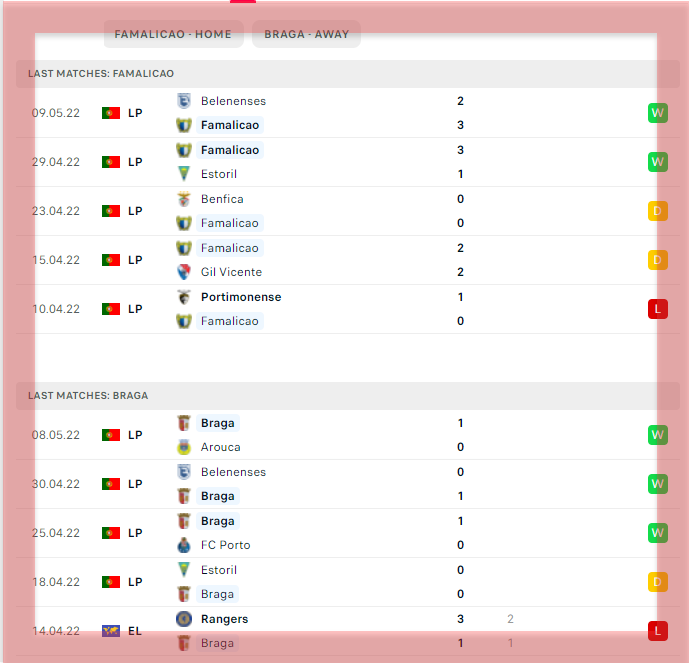