Excelsior vs. Heracles – Preview, and Prediction

Excelsior vs. Heracles – Heracles enter the opening leg of their Eredivisie playoff against SBV Excelsior after losing three games in a row during the regular season. In stark contrast, the host side survived a two-legged draw with Roda JC to keep their hopes of returning to the top division alive.

With three games remaining in May, Heracles appeared to be safe from relegation. They were eight points ahead of 16th place. However, the unexpected happened: Heracles, who were in 12th place at the time, lost three games in a row, while 17th-placed Sparta Rotterdam won all of their games during the same time frame.

They were forced to play each other on the season’s final day. Sparta led 3-0 with 11 minutes remaining until conceding a late goal to make the score 3-1. Frank Wormuth now faces a big challenge in motivating his players, who have only eight points from their final ten Premier League games.

They also lost their last three games to teams in the lowest half of the rankings, surrendering seven goals in the process. Excelsior comes into this match on a high after winning their first playoff tie in extra time against Roda, who finished one spot higher in the second tier. Despite winning only four of their final six regular-season games, the Kralingers finished in the top six.

Excelsior had gone seven games without a win before beating Roda on Saturday. Marinus Dijkhuizen’s club will relish the fact that they are the underdog in this encounter. In the final, whomever advances from this two-legged contest will face either FC Eindhoven or ADO Den Haag.

While the home team will undoubtedly be confident, we cannot overlook the fact that recent triumphs have not come easily for them. With that in mind, Heracles’ superior quality should be crucial, and they should be happy with a slender lead heading into the second leg. 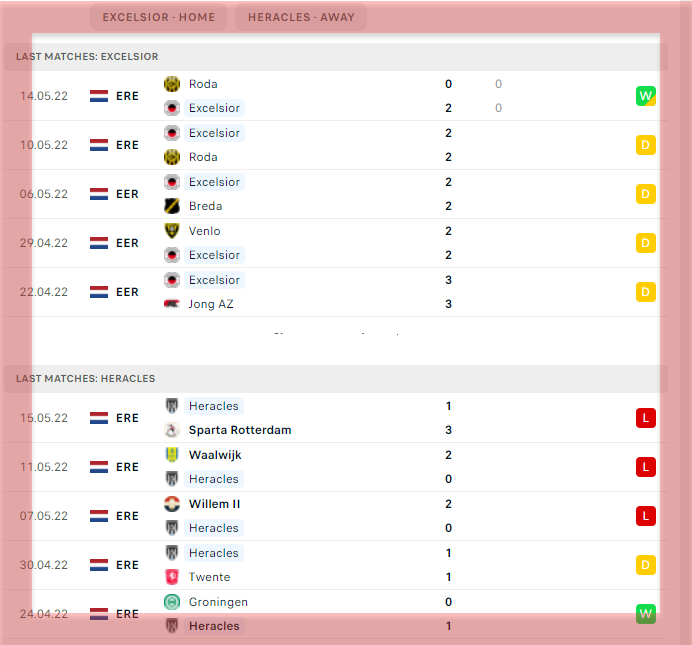