Everton vs Crystal Palace – Everton fans have been dreading relegation to the Championship for almost the whole second half of the season.

They hung on the barest of margins over the cut-off, and with only two games remaining, they had managed to push a two-point cushion above the limit.

However, the risk is still present, and they must remain vigilant in order to assure their safety for the coming season.

They are confident that they can prevent this ultimate shame by playing in front of their home crowd, which will be cheering their players on.

But it is the fact that they will have to face an in-form Crystal Palace, who are securely situated in the middle of the league, that concerns them.

They’ve had a nice run of performances recently, and they’ve been finding the back of the goal at a high rate. Palace will be eager to take advantage of the Toffees’ desperation as well.

Both sides have scored in seven of the last eight meetings at this venue. The most recent match at this venue ended in a 1-1 tie, and Everton did lost 2-3 against Brentford at home the other day.

However, they had gone undefeated in their previous three games and in four of their previous five home appearances, three of them, in fact, were victories.

Crystal Palace, on the other hand, drew 1-1 with Aston Villa on the road last week. They’ve also gone four games without losing, and it’s been nearly a month since they’ve lost on the road.

Expect plenty of goals on Thursday, with the Toffees desperate to avoid relegation and Crystal Palace ready to capitalize on their current form.

Throughout the season, both of these teams have only ten wins between them, and it is worth noting that the toffees had won eight of their ten games at home.

In the meantime, Palace has only lost to three clubs in the last four months, two of which were former champions Leicester and Chelsea. 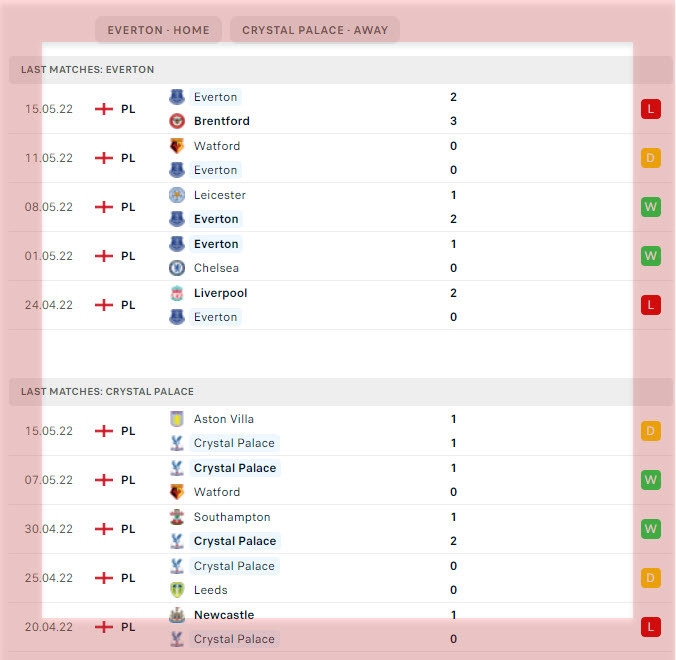