Everton vs Chelsea – Preview and Prediction

Everton vs Chelsea – Everton are currently playing with fire. They are now 18th in a table of 20, and relegation to the Championship is a distinct possibility ,They have six games left to prevent being relegated, and they need to win three of them to escape being relegated. They are, however, in the midst of a poor run of results, and they still have some extremely difficult games ahead of them. They are at home this weekend, and are set to face the current European champions, the Blues. Chelsea is now in third place on the table, and they are adamant about securing that position mathematically. To safeguard their ego, they must also narrow the distance between the top two teams as much as possible.

In comparison to the Toffees, who have been in significantly better form and have scored a lot of goals in recent months. They’ve been on a scorching hot streak, especially on the road. Given Chelsea’s recent form and Everton’s desperation, expect a high-scoring win for the Blues on Sunday.

Everton’s previous matchday result was a 2-0 loss on the road against arch-rivals Liverpool. They were also winless in seven of their previous nine games, and while improving their home form, they have yet to face a great club like the Blues.

Chelsea, on the other side, defeated West Ham 1-0 at home in their most recent match. They’d also won 16 of their previous 20 games, including a nine-game winning streak on the road. It’s also worth noting that in their previous seven road matches, they’d scored a total of 23 goals. Considering these factors, Chelsea should not only win, but also expect a high-scoring match. Everton has only managed to win eight games in this season’s Premier League ,With the exception of Manchester City and Liverpool, the Blues have scored the most goals and conceded the fewest in the English Premier League. 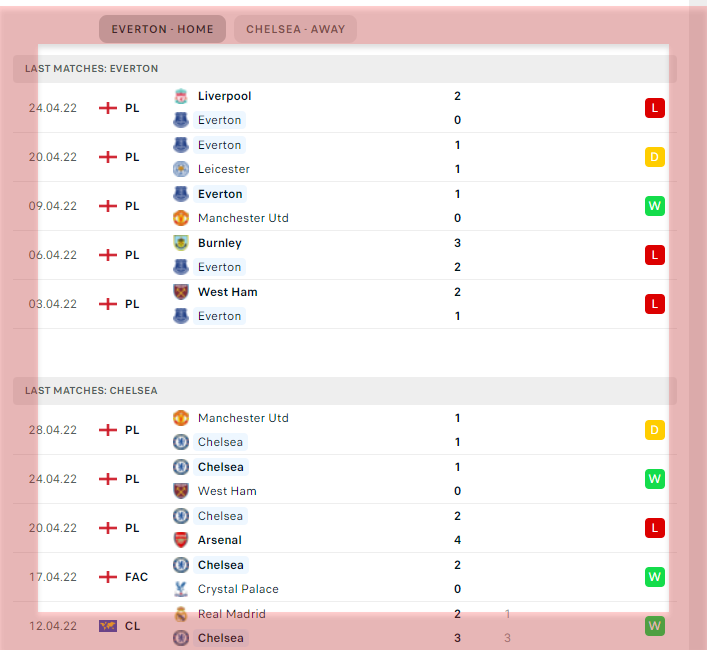