Everton vs Chelsea – Preview and Prediction

Everton vs Chelsea – This Saturday afternoon’s English Premier League match between Everton and Chelsea will cap off a thrilling first day of the new season. Chelsea should be even greater favourites than the 1.70 odds on their victory suggest going into the match.

Although the Blues had to let two key defenders leave on free transfers to La Liga powerhouses Real Madrid and Barcelona, they were able to replace them with Kalidou Koulibaly from Napoli.

Following the departure of Romelu Lukaku, Thomas Tuchel’s club missed out on a number of transfer targets, but they did manage to acquire Raheem Sterling, who might be a terrific addition in the attacking third.

On Saturday, watch out if you’re Everton because the former Manchester City winger should have no trouble getting through their porous defence. Seven days ago, Chelsea had their final preseason test against Serie A side Udinese, and Sterling scored a goal in a 1-3 victory for the Blues.

After a lacklustre season in the previous outing, Everton only managed to stay in the elite division thanks to ten points earned in the final six games. However, the Toffees will be missing a major cog in the wheel as top player Richarlison has moved on to Tottenham.

The list of acquisitions, which includes James Tarkowski, Dwight McNeil, and Ruben Vinagre, is not encouraging. Another season of potential relegation trouble for the Toffees seems likely.

When hosting Chelsea again, Everton hopes to replicate its previous performance. In early May, the Toffees prevailed by a score of 1-0. Three or more goals have not been scored in any of the most recent four head to head meetings.

During their last four meetings, Chelsea has only managed one victory. Despite beating Blackpool and Dinamo Kiev in friendlies by a combined score of 7–0, we don’t see how Everton can keep up with Chelsea in this match.

It’s important that Chelsea doesn’t give this opportunity away. At 1.70, we’re taking the away win as our main choice, but at 2.75, you can try your luck with Raheem Sterling scoring at any time in his Premier League debut for Chelsea.

Everton vs Chelsea – Head -to- Head 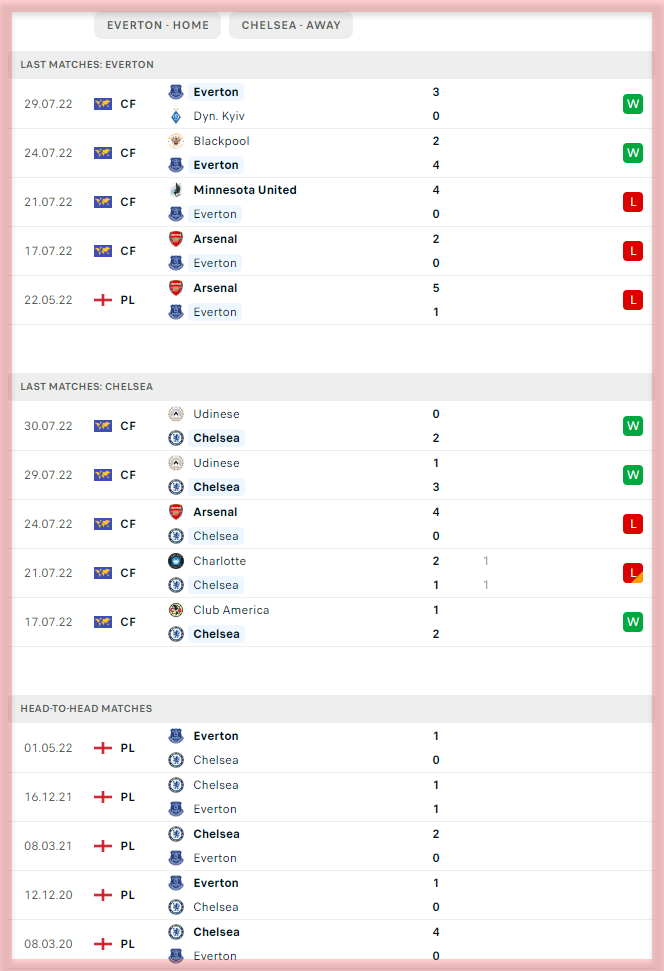