Everton vs Boreham Wood – Everton is in danger of being relegated from the Premier League. On the league, they are not uprooting any trees. Their recent league results reflect their inconsistency in the league. Aside from the league, they’ve had a good run in the FA Cup.

In their previous FA Cup match at home, they defeated Brentford 4-1. Everton will be in great spirits heading into this match after such an inspiring knockout stage victory.

Boreham Wood, on the other hand, defeated Bournemouth 0-1 in their previous FA Cup knockout round match. So far in the FA Cup campaign, they have had a decent run of form.

They are currently in third place in the National League standings. They are having a good season in the league. In the league, they have a good defensive and offensive lineup. However, there is a significant quality gap between them and their next opponents, Everton.

Based on the above statistics, we expect Everton to win since they appear to have enough strength to beat Boreham Wood despite the quality differences. As a result, we anticipate a one-sided match at Goodison Park tomorrow.

Everton will be looking to build on their recent FA Cup victory over Brentford at Goodison Park. They will be trying to proceed to the FA Cup quarter-finals with the help of home ground advantage by securing a convincing win over Boreham Wood.

Boreham Wood have failed to win in each of their last three away games in all competitions. In two of the three games, they have conceded two or more goals.

We have more than enough cause to expect Everton to win after they have won two of their last three home games in all competitions. 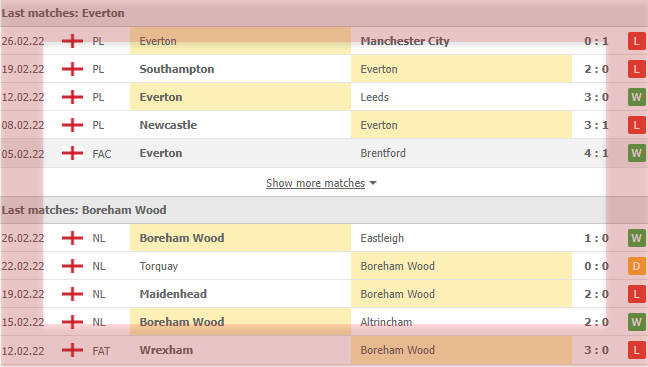