Espanyol vs Valencia – Preview and Prediction

Espanyol vs Valencia – Valencia will play Espanyol at home on Friday night, hoping to climb to fourth place in La Liga. Espanyol lost 3-1 at Celta Vigo in their final game before the winter break in Spain’s top flight.

Valencia finished 13th in La Liga last season, their lowest place since finishing 14th in 1987-88, but the club’s supporters have reason to be positive this season.

Los Che now sit in eighth place in the table, just two points behind fourth-placed Rayo Vallecano, with a record of seven wins, seven draws, and four defeats from 18 matches.

As a result, a win on Friday night would put them in the top four, and Jose Bordalas’ team has won five games in a row in all competitions, including three in the league against Celta Vigo, Elche, and Levante.

Valencia and Levante battled out a seven-goal thriller before the winter break, with Goncalo Guedes and Carlos Soler both scoring braces, and the six-time Spanish champions now have a great chance to move into the Champions League places in Spain’s top division.

Los Che have won both of their league encounters against Espanyol this season, including a 1-0 victory in the 2019-20 season’s equivalent match. Espanyol won the Segunda Division last season, ensuring an automatic return to the top level, and the Catalan club will be happy with their progress thus far in the 2021-22 season.

Indeed, they have 23 points from 18 games, with six wins, five draws, and seven defeats, good for 11th place in the division going into the next round of La Liga fixtures.

Espanyol has struggled in the league this season, winning two and losing two of their last four games, including a 3-1 loss at Celta Vigo on December 17.

Vicente Moreno’s team, like Valencia, has won twice in the Copa del Rey this month, and they’ll be searching for their first La Liga win over Los Che since August 2018.

Espanyol, on the other hand, hasn’t beaten Valencia in the league since October 2007, and they’ll be up against a confident club after a strong first half of the 2021-22 season.

Espanyol vs Valencia – Head To Head 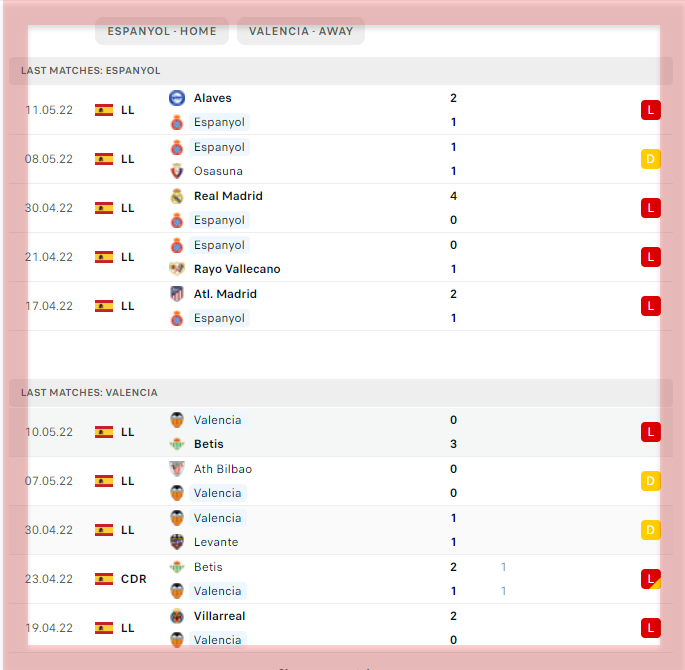