Empoli vs Salernitana – Preview and Prediction

Empoli vs Salernitana – Empoli and Salernitana, both promoted teams, will face off in a Serie A 2021-22 fixture on Saturday.

With only four points from eight games, Salernitana is at the bottom of the table. So far, they’ve only won one game, drawn one, and lost the other six.

They are coming off a 2-1 loss in the league to Spezia. The visitors took the lead through Simeon Nwankwo, but Spezia responded with goals from David Strelec and Viktor Kovalenko in the second half.

Empoli are now 11th in the table, having collected nine points from eight games. Their most recent competitive match was against Atalanta, which they lost 4-1.

Salernitana and Empoli have met 18 times in their history.

Salernitana and Empoli have played 18 matches against each other. Salernitana have won four of those clashes, while Empoli prevailed in 10. Four matches have ended in draws.

Mamadou Coulibaly is out with a muscular injury, and Luka Bogdan, Matteo Ruggeri and Leonardo Capezzi have also been ruled out. Frederic Vesli recently tested positive for COVID-19, which effectively rules out his participation in Saturday’s affair.

Lassana Coulibaly and Joel Obi are carrying knocks, leaving manager Stefano Colantuono with only a handful of choices for their clash against each other.
Midfielder Samuel Ricci and goalkeeper Jacopo Furlan have been sidelined with injuries. All other players will be available for selection.

Empoli vs Salernitana – Head To Head 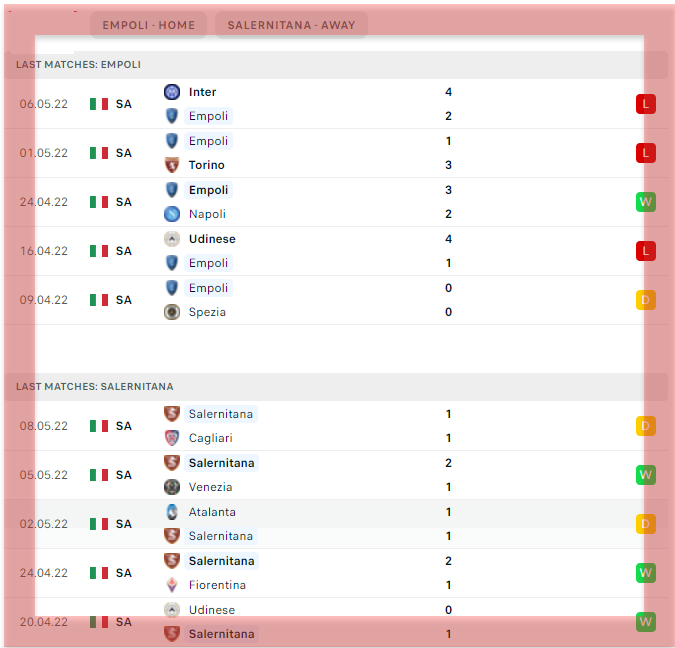