Empoli vs Atalanta – Preview, and Prediction

Empoli vs Atalanta – When compared to teams like Napoli and AC Milan, Atalanta is falling further and further behind. They dropped to fourth position in the standings after collecting only four points out of a possible nine in the previous three Serie A matches.

Last weekend, La Dea gave their worst performance of the season in a 0-2 loss at home to Lazio. They failed to record a single shot on goal throughout the whole match.

Gianpiero Gasperini’s woes are compounded by the fact that his starting attacker, Colombian forward Luis Muriel, was sent off in the aforementioned loss to Lazio.

In Gameweek No. 12, Atalanta will strive to get back on track as they travel to face Empoli at Stadio Carlo Castellani on Sunday. Similarly, Empoli’s last three league games have resulted in a win, a tie, and a loss. Their last game was nine days ago, when they lost 4-0 at Juventus.

However, it should be noted that Paolo Zanetti’s men have lost only four matches since the start of the season, making them a formidable opponent for the struggling Atalanta squad.

Most of the previous meetings between these two teams ended in a tie (9 of the previous 22). In their previous head-to-head meeting in May, Empoli shocked Atalanta 0-1. The game took place in Bergamo.

The last three of these sides’ five head-to-head meetings saw under two goals scored. In their recent losses against AC Milan (3 goals) and Juventus (4 goals), Empoli conceded a total of 7 goals. They have allowed no more than eight goals in each of their final nine league games this season.

Empoli’s 5.50 odds of keeping a clean sheet are highly enticing given that Atalanta provided little offensively against Lazio last weekend and the visitors will also be without their top striker on Sunday. There’s also a 13.00 correct score wager on a scoreless tie that you may make a stab at.

Empoli vs Atalanta – Head -to- Head 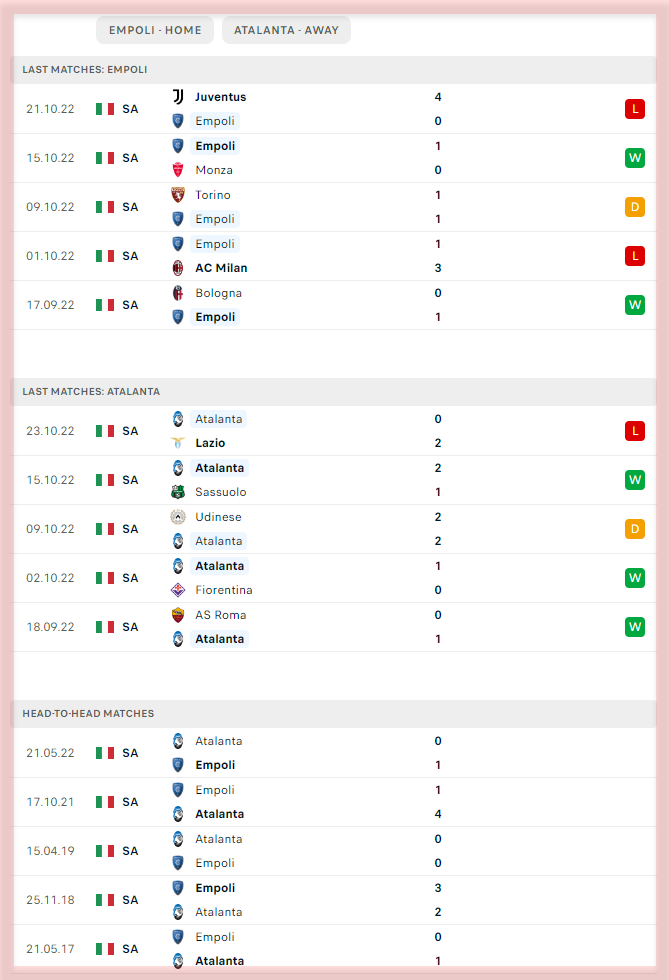