Emmen vs Groningen – Preview, and Prediction

Emmen vs Groningen – Among the poorest teams in the Dutch first flight are Groningen and Emmen. It should come as no surprise that they are situated in the bottom tier of the table. Since the beginning of the season, both sides have been giving up a ton of goals, and to be completely honest, it doesn’t seem like this pattern will ever stop.

Emmen currently holds the 17th position out of 18 teams, and they have only been successful in recording one victory. Only two teams allowed more goals than them in the entire league, and they are one of three teams that haven’t won in the last five games.

In contrast, Groningen is ranked 14th out of 18 teams and has only achieved one road victory thus far. Also, keep in mind that they have a recent losing skid away from home.

In addition, most previous head-to-head matches included a significant amount of goals. Considering all of these findings, I am inclined to anticipate a high-scoring contest this weekend between the two sides. Emmen has a protracted losing streak that began in August. They gave up two goals or more in the majority of their games during this run, and their lone victory came against struggling Heerenveen.

It should be noted that they were only promoted to the top division at the end of the last campaign, and they are finding it difficult to handle the level of competition there. Groningen, on the other hand, are in a mess away from home. They are conceding a ton of goals in the most of their games, and their lone away league victory came against the erratic Cambuur.

Emmen vs Groningen – Head To Head 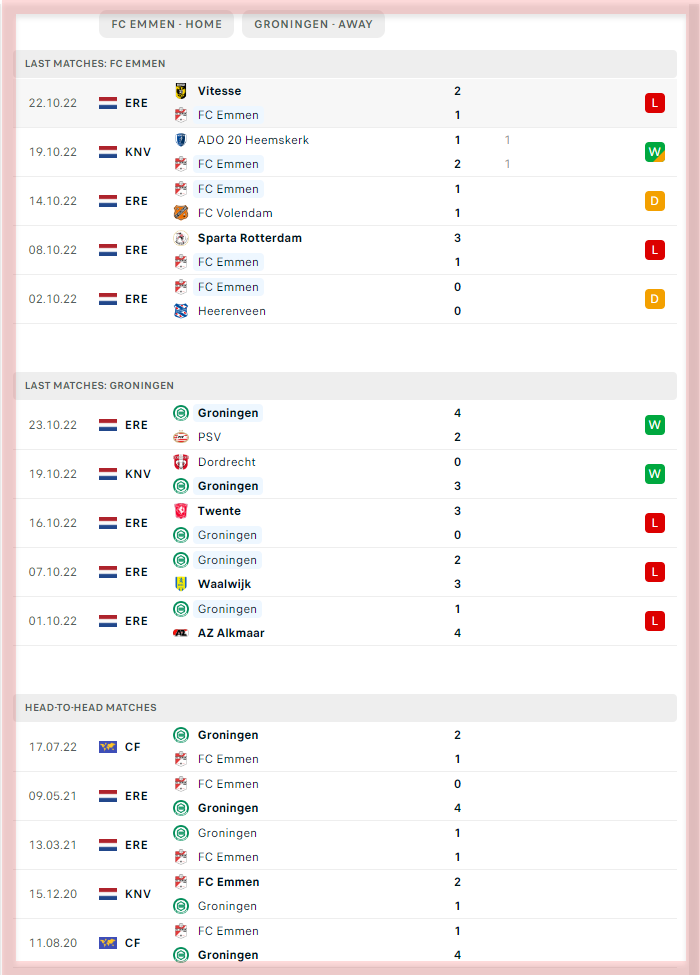