Emelec vs Palmeiras – Preview and Predictions

Emelec vs Palmeiras – Palmeiras are flying high as they begin their Copa Libertadores title defense. The team coached by Abel Ferreira scored twelve goals in two games in Group A, surrendering just one. They started the season with a 4-0 thrashing of Deportivo Tachira before thrashing Independiente Petrolero 8-1 at home in Gameweek 2.

Ferreira’s side now top Group A by four points over Emelec. Palmeiras can clinch the group’s top spot with a win over Ecuadorian Serie A runners-up Emelec on Wednesday night. It is expected that Ismael Rescalvo’s men will compete for second place in the group after facing the same opponents in their first two games. They come into this match on the back of a seven-game unbeaten run in all competitions.

The run will be irrelevant when they face one of the strongest teams on the continent, Palmeiras, who have scored twelve goals in their first two games. It’s been over three decades since these two groups last met. They were also in the Copa Libertadores group stage at the time. Palmeiras won both home and away games against Emelec, scoring five goals in total.

The easiest method to compare these two teams is to look at their results in the first two Copa Libertadores games. Palmeiras are coming off a 3-0 thrashing of Corinthians in the fourth round of Serie A on Saturday night. We think it’s a good idea to back the visitors at 1.83. 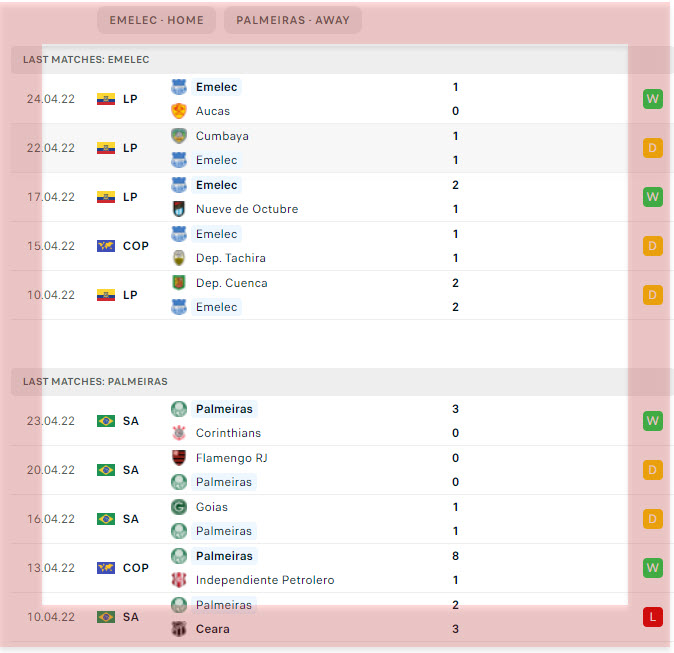