Elfsborg vs Goteborg – Preview, and Prediction

Elfsborg vs Goteborg – So far, Elfsborg has had mixed outcomes in their encounters. The club has three wins, two ties, and three losses from its eight games thus far.

The club has not won in its last two matches and will be hoping to end that streak with this match. With eleven points from their matches, the team is now tenth in the league table.

Elfsborg’s last match was against Sirius. Sirius scored two goals in the encounter, while Elfsborg was unable to score, resulting in a 2-0 FT loss. Goteborg had started the season successfully, winning three matches in a row.

However, the team has had some difficulties obtaining wins since then. They haven’t won in their last five games, losing three of them.

Because of their recent poor showing, Goteborg has dropped to tenth place in the league with eleven points. Varberg was Goteborg’s most recent opponent. Both clubs scored one goal apiece, and the game ended in a 1-1 FT draw.

Elfsborg won their last meeting with a 1-0 FT result. Elfsborg has won the last three head-to-head meetings. In the last four head-to-head matchups, Goteborg has failed to score.

Goteborg is currently at a disadvantage due to their recent performance. They haven’t won in their last five games. Both teams are tied in points, and the winning team will take the lead if they win the next match.

Elfsborg has won their last three home games. In the games that the team has won, they have scored above 2.5 goals.

Goteborg won the first two of their away matches, but lost the other two. They’ve also failed to score in their last two road games.

According to the records, Elfsborg has performed better in recent matches than Goteborg and has a greater probability of winning. We can also predict the game to finish with more than 2.5 goals.

Elfsborg vs Goteborg – Head To Head 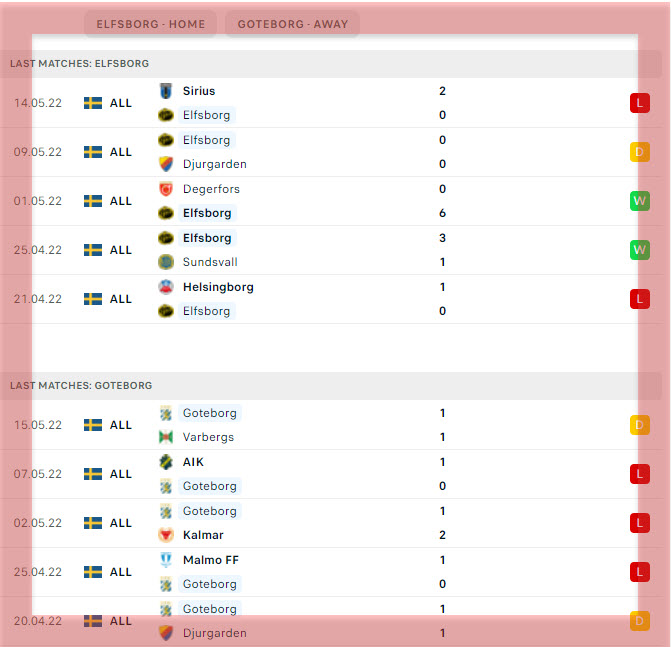