Elfsborg vs Djurgaarden – Preview, and Prediction

Elfsborg vs Djurgaarden – Elfsborg has performed admirably in every match since the season began. The club has three wins, one tie, and two losses in its previous six games.

They have won two of their past three matches in which they have scored more than 2.5 goals. With ten points from their matches, the team is presently sixth in the league table.

Elfsborg’s last match was against Degerfors. Elfsborg scored six goals in the encounter while Degerfors was unable to score any, resulting in a 0-6 FT triumph for Elfsborg.

Djurgarden has had a skewed start to the season, with varied performances. Djurgarden has won three, drawn two, and lost two of their seven matches so far.

With 11 points from their matches, their performance has placed them in the top half of the standings, in 5th place. The club is now undefeated in its last two games and intends to continue this trend.

Both Djurgarden and Helsingborg played each other in their most recent match, and both teams scored two goals, resulting in a 2-2 FT draw.

Elfsborg has performed admirably in recent encounters, winning both of their most recent matches. They’ve also scored over 2.5 goals throughout the games.

Djurgarden, on the other hand, has had a mixed bag of results. They have also gone undefeated in their last two games. Elfsborg has the advantage of being able to play on their home turf.

Despite the fact that their first match was a loss, the other two matches were victories. This season, Djurgarden has not won any of their away matches.

Under 1.5 goals have been scored in all three games. The squad has an edge over Djurgarden because they are playing at home. 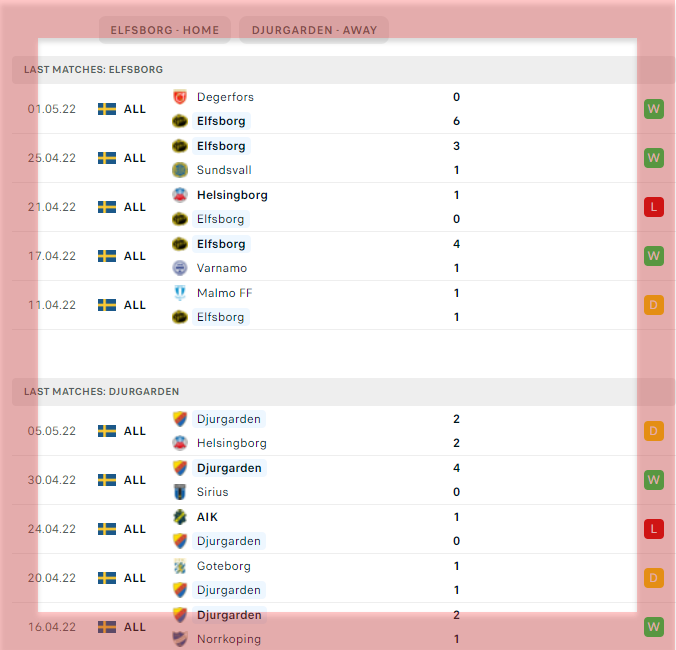