After finishing the 2021/22 season eight points ahead of Borussia Dortmund, they established themselves as a league powerhouse. The catch is that Nagelsmann won’t have his star striker, Robert Lewandowski, to help him out.

After scoring 30+ goals for three straight seasons, the 33-year-old shifted allegiance to Barcelona. Sadio Mane, a Liverpool transfer, has replaced the Polish player. And he got off to a great start in Germany, scoring in the Super Cup victory over Leipzig, which ended in a 5-3 score.

A string of eight straight losses down the stretch doomed Eintracht Frankfurt to the eighth spot in the league standings. Even so, they were able to secure passage to the Champions League group stage by virtue of their Europa League victory.

They came away from the competition with some impressive achievements. In particular, the aggregate 4-3 victory over Barcelona stands above all others. On Monday, Oliver Glasner’s men played their first game of the season away to Magdeburg, and they came away with a 4-0 victory.

Bayern won 1-0 in last year’s rematch, although Frankfurt had won the previous two meetings. The Bavarians have won their last seven matches here, scoring in each of those games.

The most scoreline in recent games between the sides is 2-1 that occurred in 3 of the 5 meetings. While Bayern Munich are clear favourites, betting on an absolute victory for them offers no benefit. Therefore we will back the visitors in tandem with btts priced at 2.40 odd.

There are several strong anytime goal scorer chances with Bayern, but odds are too short to offer us any benefit. Although the Argentine was unable to score in Magdeburg, we are backing Rafael Santos Borre due to his sizeable aerial threat and goal-scoring prowess. 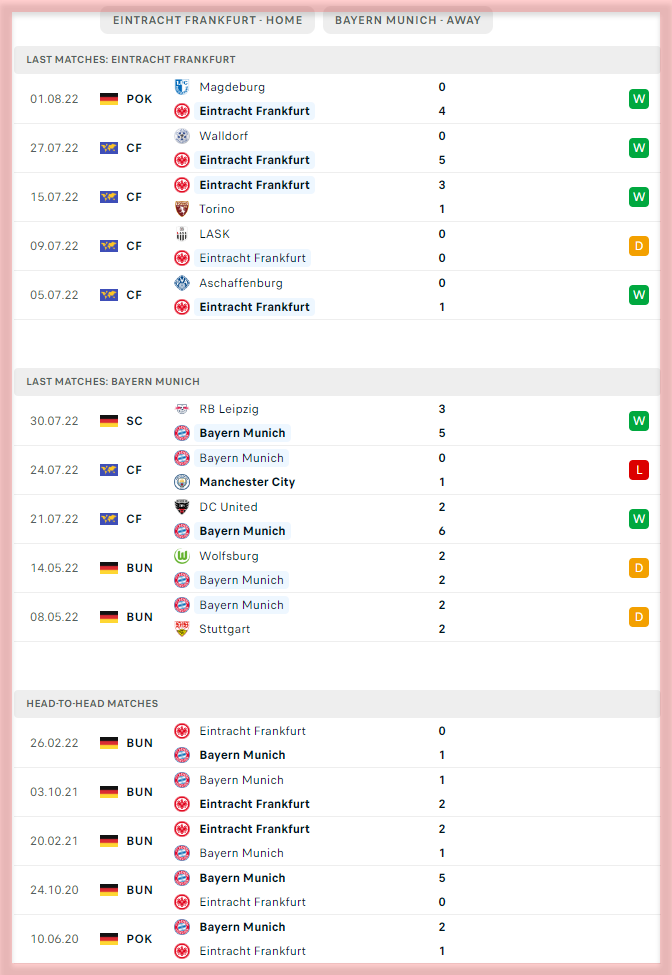