Dynamo Kyiv vs Fenerbahce – In July of this year, Dynamo Kyiv eliminated Fenerbahce from contention for the UEFA Champions League. Less than four months later, the two teams will square off in the UEFA Europa League’s Group B playoff phase.

Fenerbahce leads their group going into the final day, which puts them in a much better position going into the match. However, the Turkish team is tied with Rennes in terms of points and only outperforms the French team in terms of goal differential (the teams are not separated by head-to-head outings).

In order to place themselves in the best possible position in the competition for the top spot in the group and an easier draw later on, Fenerbahce must win by as many goals as they can on Thursday.

On the other hand, Dynamo Kyiv is stuck at the bottom of the group standings with no possibility to even move up to third place and carry on the Conference League’s European adventure.

Only one point was earned by the Ukrainian team in their previous five Group C games. In their first four Europa League games, they have only managed to score twice.

On the other hand, Fenerbahce shown strength by holding teams like Rennes to 3-3 tie seven days prior in Istanbul.

Nine head-to-head matches will take place between these two rivals, and Fenerbahce has only ever won once, a 2-1 home victory over Dynamo Kyiv in September of this year.

Less than three goals were scored in four of the previous six meetings between the two teams. In July of this year, Dynamo Kyiv eliminated Fenerbahce in the UEFA Champions League qualifying round with a 1-2 victory away from home after extra time.

We rank Fenerbahce as the undisputed favourites to win this matchup because of their superior performance thus far in the UEFA Europa League.

The 2.87 odds offered for the visitors to be ahead at halftime and to win the game are excellent value. Fenerbahce can also be backed at 3.00 odds to win by at least a two-goal margin. 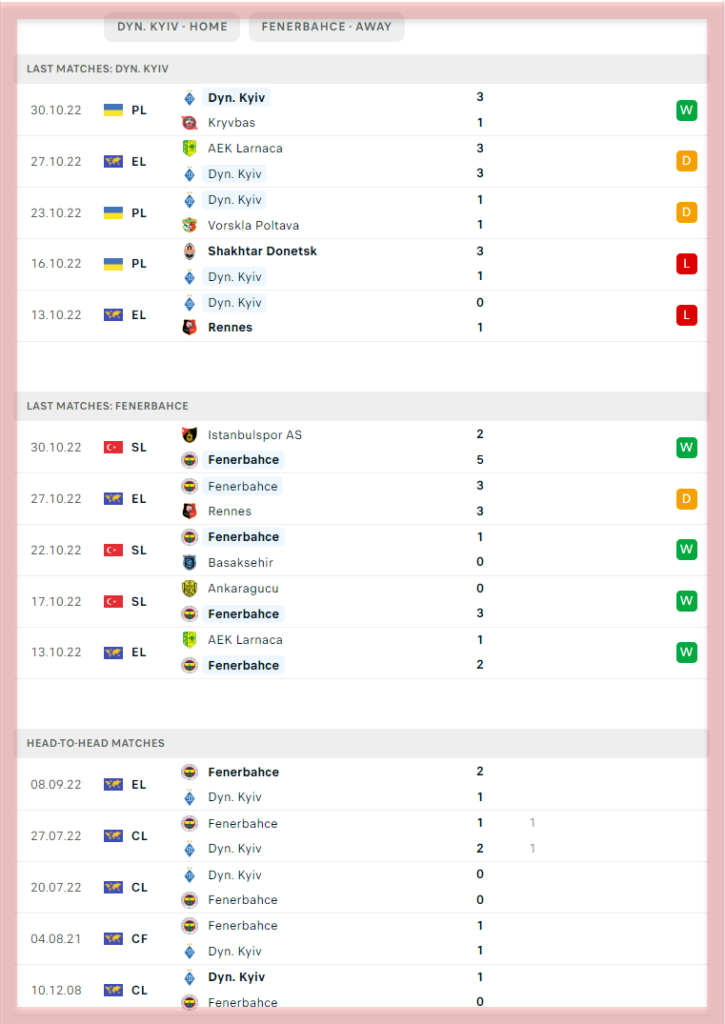