Dundalk vs Drogheda – Preview and Predictions

Dundalk vs Drogheda – Drogheda will face Dundalk, a mid-table side, with five points and a place between them. This Friday at Oriel Park, these two sides will face off in the Premier Division’s 13th Round.

With 18 points from 12 games, Dundalk is in fifth place in the standings. They won four times in the league, drew six times, and lost two times.

he hosts have won three times in their past five league games and are a defensive team. So far, they’ve scored 14 goals while surrendering nine.

Dundalk, who won their last game 2-1 against Shelbourne in the Premier Division, will be hoping for a repeat performance. They’ve maintained their defense tight, with only four goals scored on their end in their past six games.

Drogheda United, on the other hand, is in seventh place on the standings with 13 points. They won three of the 12 games they played, drew four, and lost five others. They’re only 6 points out of the relegation zone, and they’ve only won once in the last six league slates.

Drogheda’s recent league match ended in a 3-2 defeat to Sligo Rovers, ending their six-game unbeaten run in the league. They’ve been outscored in five of their last six games, allowing their opponents to score eight goals in total.

Dundalk has won three of their previous five home league games, while Drogheda has won twice, and Three of their past five head-to-head meetings have finished in a 1-0 result.

Drogheda won 1-0 in the opposite fixture last month, and three of their last six home games have included both teams scoring.

Prior to this game, Dundalk had gone undefeated in their prior six league home fixtures. They also won the last three h2hs in a row, scoring twice in each one. Drogheda, on the other hand, has lost five of their past eight league away games.

When factoring their on-road schedule, they have only won once this season. Given the hosts’ recent home form and current league form, we have no choice but to back them to win on Friday. 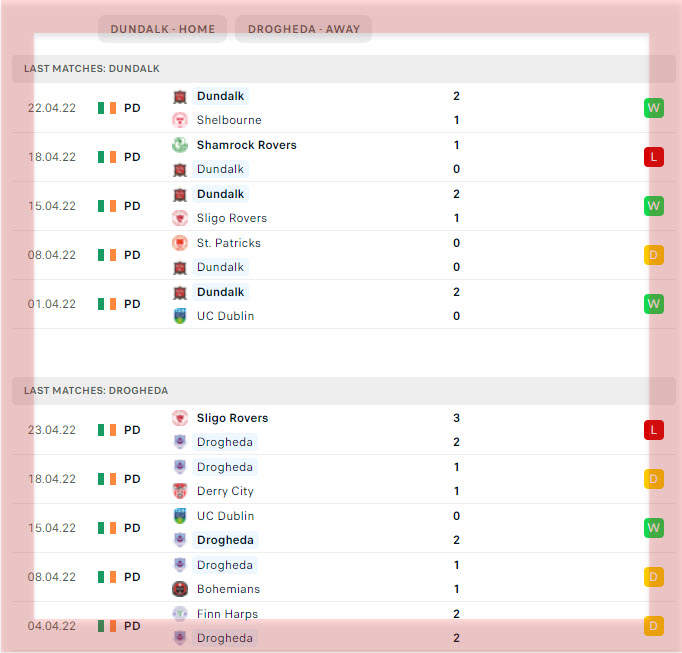