Dudelange vs Pyunik – Preview, and Prediction

Dudelange vs Pyunik -Dudelange has been putting on excellent performances for a while, and in the first leg, they even won 1-0 away from home.

Pyunik will undoubtedly have a challenge if they are to maintain their chances of competing in the Champions League. In addition, they have been failing to find their form for a while now and are conceding a lot of goals.

The current Luxembourg champions, Dudelange, won the championship last year with style. At the end of the season, they held a 5-point advantage over the competition overall and had consistently demonstrated their supremacy over the other teams.

During this time, they had amassed a total of 78 goals, while none of the other clubs had even reached the 70-goal threshold.

While Pyunik had to work extremely hard to win the Armenian championship last year, they only held a one-point advantage. They did not win the competition with the most goals scored or the fewest goals allowed.

They had also lost the first leg, and at home no less. They now have to overcome this one-goal deficit while still holding down the fort for their opponents.

Dudelange has won three straight games and nine of their last ten games overall. Also keep in mind that they have triumphed in 10 of their previous 15 home games.

On the other hand, Pyunik is now on a 3-fixture losing streak overall and a 4-game losing streak at home. Keep in mind that over the course of their previous 12 road trips, they only had a total of 2 clean sheets away from home. The only meeting between the two squads had resulted in a 0-1 road victory for Dudelange. 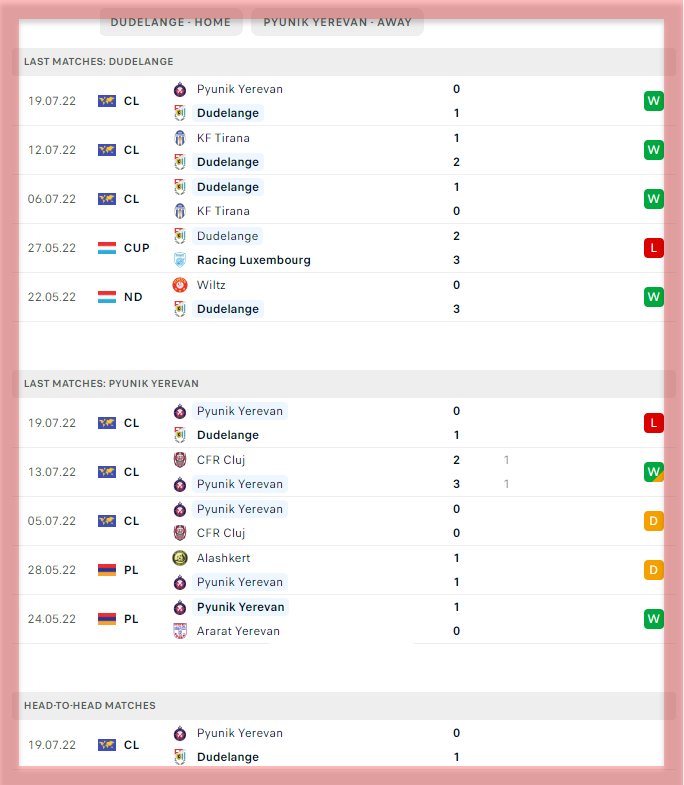