Drogheda vs Sligo – Preview, and Prediction

Drogheda vs Sligo – Drogheda United and Sligo Rovers will meet at the United Park on Friday in a bid to break a five-match losing streak away from home.

With a four-game winning streak in all competitions under their belt, the Claret and Blue Army are hoping to keep the momentum going this weekend.

Drogheda United’s 1-1 draw against Derry City at the Ryan McBride Brandywell Stadium on Friday was their worst result of the season. Mathew Smith opened the scoring for the hosts in the eighth minute, before Dean Williams equalized six minutes later.

Bohemian drew 1-1 with Kevin Doherty’s men on May 27 to bring a stop to their two-game winning streak. Having won five, drawn six, and lost eight of their first 19 games in the Premier Division, Drogheda United currently sit eighth in the table with 21 points.

​After a two-game winning streak, the Claret and Blue Army return to their own territory where they haven’t lost in five of their last six games dating back to March.

​Sligo Rovers, on the other hand, returned to winning ways by defeating Finn Harps 3-0 at the Showgrounds Stadium last time out. Aidan Keena, the Irish attacker, put in a standout display, scoring twice after Karl O’Sullvan’s eighth-minute goal to give the hosts a 3-0 victory.

​The Bit O’Reds have now won two and drew two of their previous four matches in all competitions, following their 2-1 loss to Bohemian in May.It’s been a while since they’ve won a game away from home, with two draws and three defeats extending back to an April 18 success against Finn Harps.

​Sligo Rovers are now fifth in the league, six points behind Derry City in the Conference League qualification position, with 28 points from 20 games.

Drogheda vs Sligo – Head -to -Head 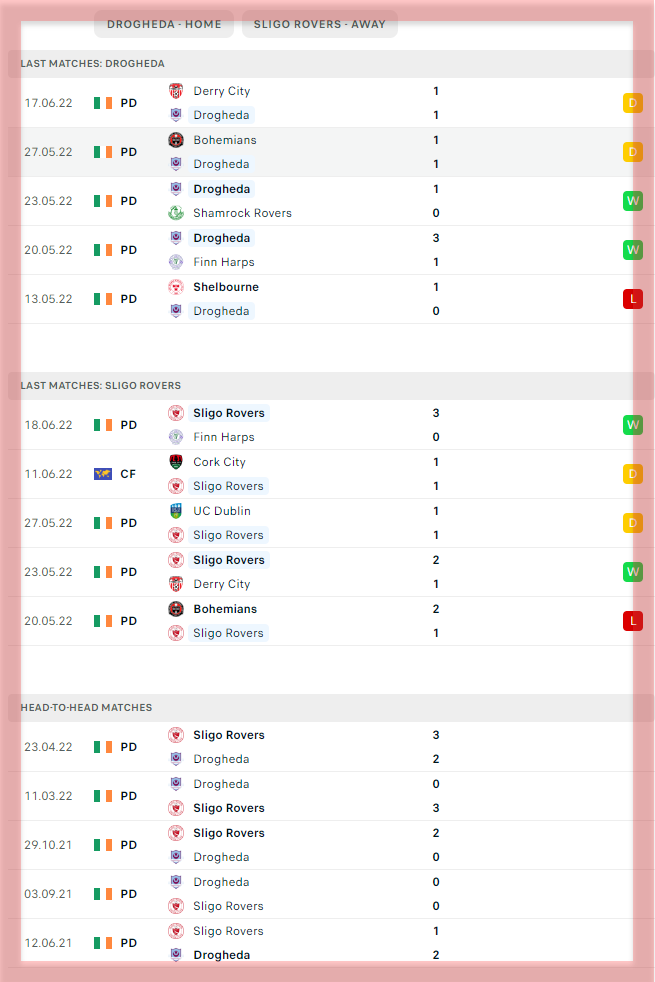