Drogheda vs Shamrock Rovers – Drogheda United’s recent form suggests that they are having some difficulties. In their last five games, the team has failed to win, and in their last four, they have lost consecutively.

The club has only won three of their previous seventeen games. The team has four wins and eight losses from the remaining matches. With 13 points from their matches, the club is presently ranked eighth in the league.

Drogheda United’s last game was against Shelbourne. Shelbourne scored the game’s only goal, leaving Drogheda scoreless, and the game ended with a 1-0 final score.

Shamrock Rovers have been in excellent form in recent matches, putting them among the Premier Division’s top contenders. In the last thirteen games, the team has not lost.

With 39 points, they presently lead the league table. They are seven points ahead of the league’s second-place club. The team has won four games in a row at the time.

Shamrock Rovers’ most recent encounter was against UC Dublin. Shamrock scored three goals in the match while Dublin failed to score, resulting in a clean sheet for Shamrock.

Drogheda’s home matches have yielded a mixed bag of results. They have won two, drawn two, and lost three matches thus far. This season, the Rovers have had a rough start on the road. They have, however, improved their record recently, going five games without losing on the road.

In the forthcoming encounter, Shamrock Rovers are the obvious favourites. The visitors have scored over 1.5 goals in the most of their recent games and will try to do so again in this one. In the last two games, Drogheda has failed to score. As a result, we can expect Shamrock Rovers to keep a clean sheet. 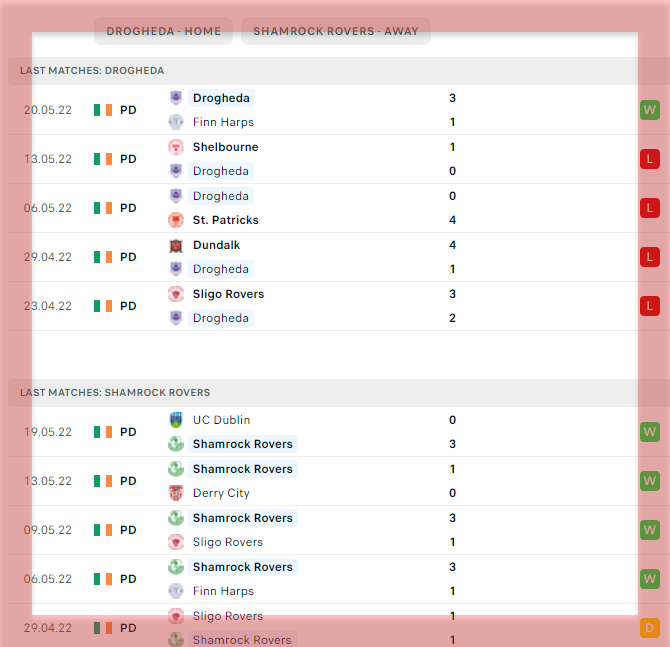