Dordrecht vs Jong Ajax – Dordrecht takes on Jong Ajax in the Eerste Divisie game week 30 on Friday at Dordrecht.

Dordrecht had no chance against Roda JC in their previous match. Roda began scoring in the 20th minute of the game and continued to score until the final seconds. Dordrecht failed to break through Roda’s defenses even once, resulting in a 4-0 FT loss for Dordrecht.

Jong With each passing matchday, Ajax’s losing streak lengthens. Even though Ajax scored first in the previous match against Emmen, they were unable to maintain their lead. Emmen scored two more goals after that, resulting in a 2-1 FT loss for Ajax.

Dordrecht improved in their early matches, but they can’t seem to maintain their form. They’re back to winning matches on a sporadic basis. Only one of the team’s last five matches resulted in a win. With only 25 points from their matches, they are in 18th place on the table.

Ajax Reserves appear to be struggling with their form recently. They have lost their last three matches in a row. The team is currently fifth in the league table, with 49 points earned from their matches.

Dordrecht has not had a particularly successful season this year. They have lost more matches than they have won and drawn combined. However, the team has scored in the majority of their matches and will most likely score in their upcoming matches as well. With this match, Ajax reserves have a good chance of snapping their losing streak. They have played well in their previous matches and can return to form at any time.

Dordrecht’s home matches have had a mixed bag of results. They have also gone unbeaten in their last four games. Ajax’s recent away performances have been disappointing, and they will look to end their winless streak with this match.

In this match, I believe Ajax will try to make a comeback. The match will end with more than 2.5 goals, with both teams expected to score. 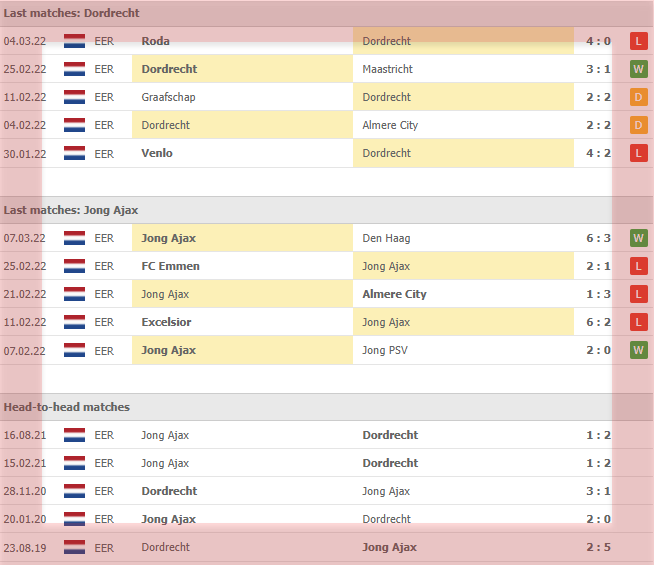