Djurgarden vs Malmo – Preview, and Prediction

Djurgarden vs Malmo – Djurgarden will host Malmo, who have lost their last two games, with the hopes of snatching a win. This Monday, these two teams will face off at Tele2 Arena.

With 15 points after eight games, Malmo sits in third place in the standings. They won four games in the league, drew three times, and lost one game.

The visitors just need four more points to reach the top of the league, and they have so far been a defensive unit. They scored eight goals while allowing only three, demonstrating their solid defence.

Following their 2-0 league setback to AIK, the visitors will be hoping for a better result here. Their league unbeaten streak came to an end with this setback. In five of their last six games, they have scored a notably low number of goals against their opponents.

Djurgarden, on the other hand, is in sixth place on the standings with 12 points. They won and drew three times each in the eight games they played, while losing twice. Their overall goals to conceded ratio is 12:7, indicating that they need to make some defensive modifications.

Djurgarden comes into this match on the back of a goalless Allsvenskan draw against Elfsborg. Kim Bergstrand’s Djurgarden have scored 9 goals in their last 6 games, giving them an average of 1.5 goals per match.

In the previous three games, Djurgarden has not lost a league draw against this opponent. They are unbeaten at home in their last four league games and have yet to lose at home this season.

Meanwhile, Malmo suffered their first Allsvenskan defeat, which came in an away game. For the last four league games, they have gone winless versus Djurgarden on the road.

We believe this match will result in a Djurgarden win or draw since the hosts are good at home and the visitors have only lost once on the road. 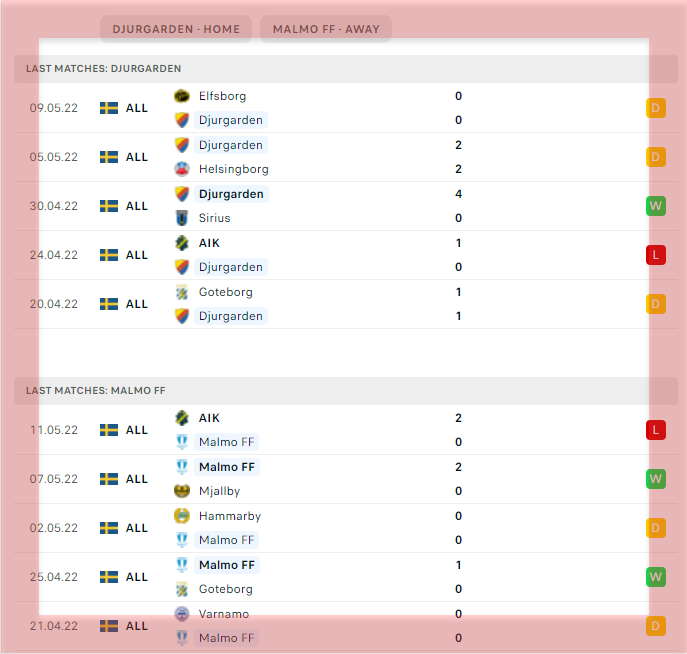