Djurgaarden vs Shamrock Rovers -Djurgaarden are one of the most pleasant surprises of the entire group phase in this term of UEFA Europa Conference League. The Swedish outfit stormed past their counterparts in Group F, winning the group in a phenomenal fashion.

The team led by Kim Bergstrand won four and drew one of five Conference League games so far. This fabulous record is enough to keep the Swedes six points clear off second-placed Molde and eight points above Gent in third position.

Djurgaarden will have a great chance to finish the group stage on a high on Thursday evening when they host the rock-bottomed Shamrock Rovers in probably the easiest of all fixtures in the section.

The Irish team are at the very foot of the standings with just two points in five matches. They have already lost all hopes of qualifying for the next round and have nothing to play for on Thursday in Swedish capital.

The lack of cutting edge required for this level of football represented the main issue for Stephen Kenny and his men so far in the campaign.

Shamrock Rovers only managed to score their inaugural Conference League goal seven days ago when they held Belgian side Gent to a 1-1 draw at Tallaght Stadium.

Nevertheless, we also have to praise Kenny for the marvelous job he has done taking this Shamrock team to the new title in the top fight of Irish football.

interestingly, these two teams locked horns exactly two decades ago in the UEFA Europa League first qualifying round .Back then, Djurgaarden advanced with two easy wins, beating the rivals 5-1 on aggregate.

Interestingly, Djurgaarden’s lone draw in this group has come just against the likes of Shamrock Rovers back in September.

Although Djurgaarden played a tough domestic league game against Norrkoping on Monday evening, we still like their chances of easing past Shamrock Rovers here. After all, the Irish team have only managed to score one goal in five Conference League games.

You can back Djurgaarden to win to nil at the 2.50 odds, the braver punters can try their luck with the hosts to win 2-0 at the odds of 7.50. 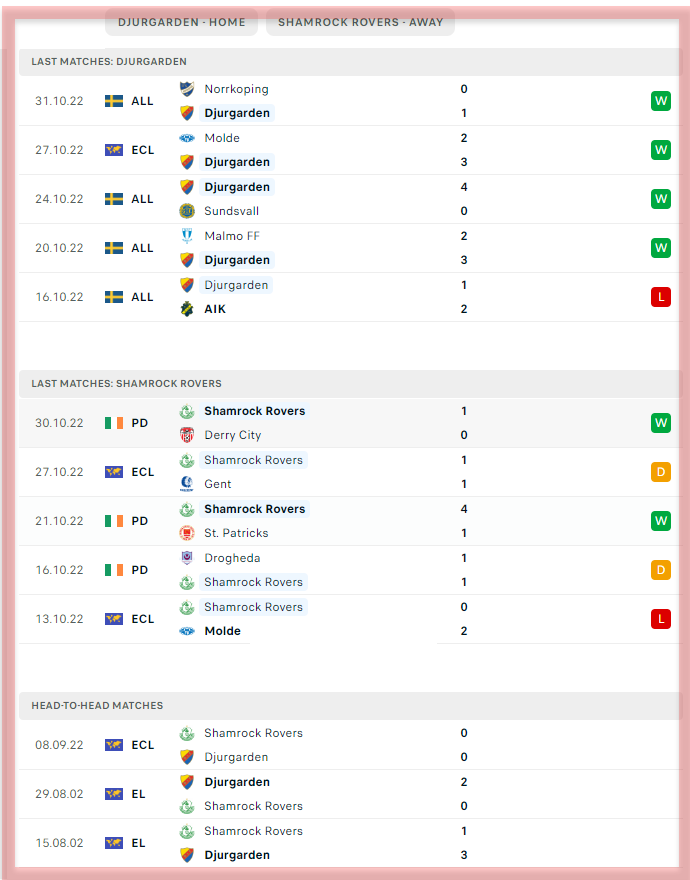