Diego Simeone almost certainly affirms that the club has instructed him not to start Antoine Griezmann. 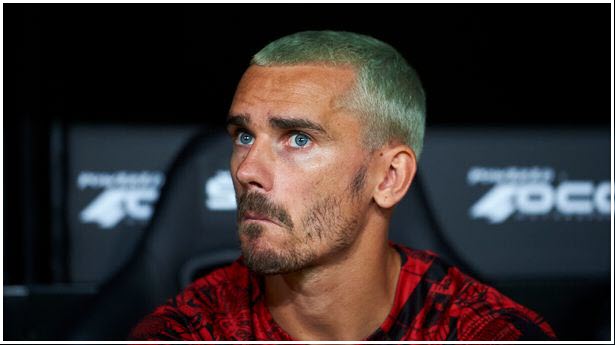 When questioned about his bench position on Friday, Simeone remained evasive.

In order to avoid having to pay Barcelona €40 million (£35 million) if Antoine Griezmann plays enough minutes this season, Diego Simeone has all but admitted he will not start the Frenchman.

Griezmann has already scored twice but hasn’t yet made a start after joining Atletico in the 64th, 62nd, and 75th minutes of Atletico’s three games.
Simeone responded, “You have known me for ten years now; I am a man of the club and I always will be,” when asked why the player has only been used as a late substitute so far this season.

He responded by almost admitting that the decision had been made to limit the Frenchman’s playing time due to a provision in his loan agreement with Barcelona.
Griezmann’s contract requires Atletico Madrid to pay Barcelona €40 million (£35 million) and extend his contract for two more years if he plays more than 45 minutes in 14 games this season.
It is uncertain whether Atletico will continue this policy after the transfer window closes.

By implying that they weren’t going to use him enough to activate his buy clause, Atletico may have been pressuring the player and his parent club Barcelona to find him a new home this summer.
The club could now use him more freely since the window is closed. When they play Real Sociedad on Saturday, the post-market policy will be put to the test for the first time.

Selling Alexander Isak to Newcastle and purchasing Umar Sadiq from Almeria made them one of Spain’s top market movers.
With the bonuses taken into account in the acquisition of Umar Sadiq from Almeria, they also took home the prize for the best-negotiated add-ons in any deadline-day deal.
Jokin Aperribay, the president of Real Sociedad, announced on Thursday that the team would give Almeria €1 million (£866,000) if they won LaLiga, €1 million (£866,000) more if they won both leagues, €750,000 (£650,000) if Sadiq won the Golden Boot, €750,000 (£650,000) more if Real Sociedad advanced to the Champions League semi-final, and another €500,000 (£433,000) if he

Sadiq will have been the greatest signing in Real Sociedad’s history if Almeria is able to cash all those checks.
He still represented a profitable sale for Almeria. They receive €20 million (£17.3 million), plus €2 million (£1.7 million) in much more attainable add-ons for the productive 25-year-old Nigerian striker.