Derry City vs Finn Harps – When Derry City hosts Finn Harps in the North-West Derby on Friday night, they will be looking to bounce back from three straight defeats. Despite their poor form, the hosts are now second in the table, while Finn Harps are ninth with only 10 points from their 17 matches this season.

Derry City, the two-time League of Ireland Premier Division champions, had a strong start to the season, going undefeated in their first nine games and winning seven of them. The Red and Whites bounced back from their first loss of the season at home to Shelbourne with seven points from their following three games, but they haven’t won in the league since defeating St Patrick’s Athletic by four goals in late April.

In fact, Ruaidhri Higgins’ side has only picked up two points in their last five games, losing all three to Shamrock Rovers, Dundalk, and Sligo Rovers. However, Derry remain in second place in the league, seven points behind champions Shamrock Rovers, with Dundalk in third place only a point back and a game in hand.

The Candystripes have the third-best home record in the League of Ireland Premier Division this season, with 15 points from nine games, and they’ll be facing a Finn Harps side that has only five points from their eight away games.

The visitors are coming off a 1-0 setback at home to Dundalk on Wednesday, and they have now lost their past four league games in a terrible run. Finn Harps haven’t won in the league since a 1-0 win over Shelbourne at the end of April, and their poor form has landed them in ninth place in the table, nine points behind eighth-placed Drogheda United and only two points above of bottom-placed UCD.

Ollie Horgan’s side, who finished ninth in the League of Ireland Premier Division last season, will be anxious to get the better of rivals Derry in the much-anticipated North-West rivalry. When the two teams played in the opposite game last month, Derry came out on top 2-1, but the points were split in a 2-2 draw at Brandywell Stadium in September 2021.

Both teams will be in poor form coming into this match, but Derry has the better quality across the board, and we are picking the home club to break their recent losing streak with a crucial win over their opponents. 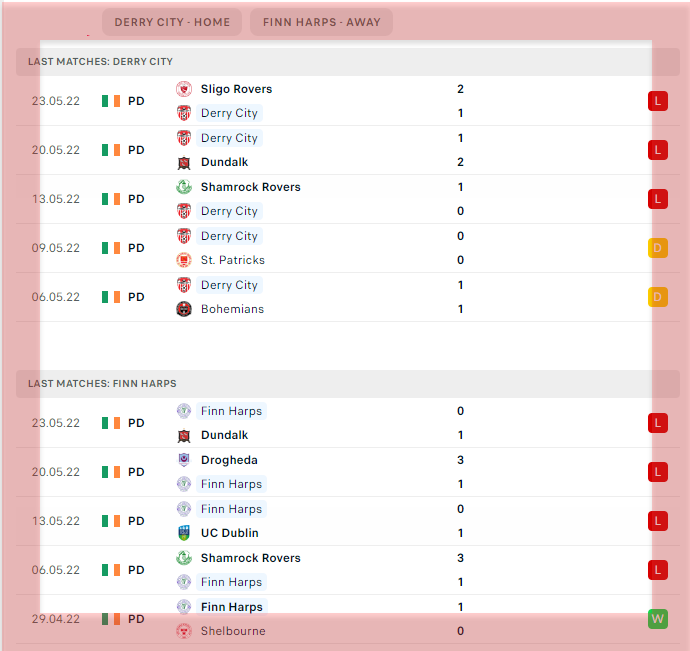