Deportivo Alaves vs Villarreal B – Preview, and Prediction

Deportivo Alaves vs Villarreal B -League leaders Alaves will look to add another victory as they will host Villareal B at Estadio Mendizorrotza. Both teams are separated by eight points ahead of this fixture.

The host are in decent form this season. They played against Eibar last time in a goalless draw. They are now on a seven-game unbeaten streak starting in October.

On the other hand, the visitors picked up three crucial points as they edged past Ibiza by 1-0. This victory comes after their 1-0 defeat against Huesca. In the game against Ibiza it was Diego Collado who scored the only goal in the 54th minute of the game.

The main concern for Luis García’s side is that his team are playing aggressive as they have picked up a red card against Racing and Zaragoza. The team will risk losing points if this trend continues.

An important point to note is that the host have lost only once this season. However, three of their last five games have ended in a stalemate.

This is the first time both teams will go head-to-head and The last time Villareal won an away game was way back in August this year, The host have kept a clean sheet in three of their last five home matches.

Miguel Álvarez will be concerned about his team away form. As they have lost five of the last seven away games this season.

Our prediction is that Deportivo Alaves will win this game by 2-0 – the odd for this tip will be at 7.00. The league leaders have an excellent home record this season as they have not lost any home game till now.

Our next tip for this game is that Deportivo Alaves will keep a clean sheet – the odd for this tip will be at 2.10. In three of the last four games, the host have kept a clean sheet. At the same time Villareal are facing a goal drought as they have not scored in their last two consecutive games.

Deportivo Alaves vs Villarreal B – Head to Head 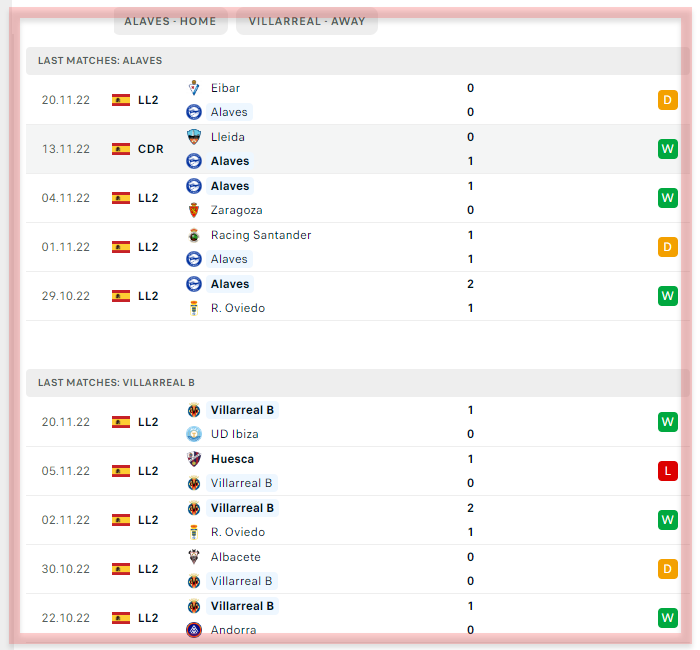