Den Bosch vs MVV – MVV Maastricht are in a state of disarray after losing back-to-back league games. Their dreadful form has continued, as they have lost 10 of their last 11 games across all competitions, with only one win. Den Bosch are also on a bad run, having lost 7 of their last 8 league games. They have yet to win this season and will look to change that when they face the Blues, who are also on the same page, tomorrow at De Vliert in the 30th round of the Eerste Divisie.

With only 27 points from 28 games, the hosts are ranked 15th in the standings. In the league, they won eight times, drew three times, and lost 17 times.

Excelsior had previously thrashed Den Bosch by a score of 0-4. They only scored once in their last five games, while the opposition scored nine times, and there were four instances where the hosts failed to score at all.

Maastricht, on the other hand, is ranked 17th in the table with 26 points. They won 8 of the 28 games they played, drew twice, and lost on the other 18 occasions. They only scored 28 goals while allowing 57, exposing their defensive weakness.

The visitors dropped back-to-back league games to Dordrecht and Breda. They have conceded a total of 13 goals in their previous five league games, while their own forwards have only scored four times.

We expect the home team to win because they have a better record at home, whereas Maastricht has lost 10 of their 14 road games this season. Given both teams’ recent struggles, a desperate need for a win will make this game exciting. 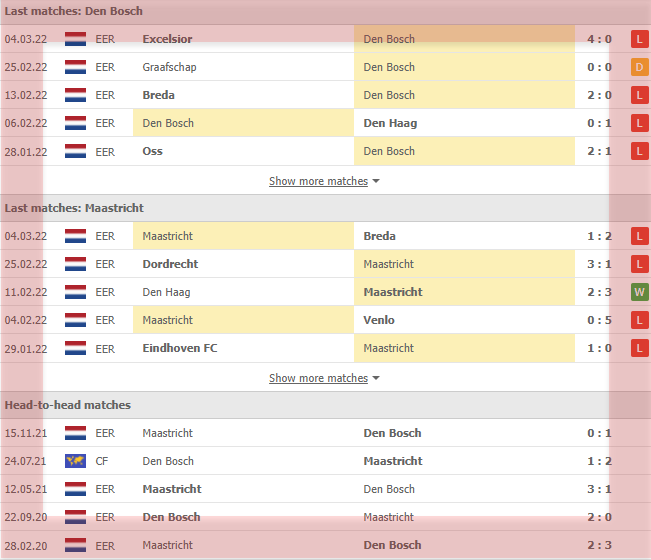