Degerfors vs Helsingborg – Preview, and Prediction

Degerfors vs Helsingborg – Degerfors had a terrible start to the season, with a string of poor performances. They dropped their first six games of the season. Their desperation to put up a good show paid off in the final game, when they hit their first three-pointer of the season.

Degerfors won 2-3 on the road against Sundsvall in their most recent league match, ending a six-game losing streak in the league. With home advantage, they will be looking to make that triumph count.

Helsingborg, meanwhile, has had a slow start to the season. This season, they have lost seven of their eight league games. Their defensive and offensive lineups are similarly underwhelming. They’ll be trying to put an end to their inconsistency with a strong performance in their next match. Helsingborg was defeated 0-1 at home by Norrkoping in their most recent league match. With that loss, they have now gone four games without winning in the league.

This season, Degerfors has failed to win at home. They lost all three of their home games, allowing goals at an alarming rate. However, their recent good form gives them reason to be optimistic when they face Helsingborg, who have been disappointingly erratic thus far.

Furthermore, Helsingborg has lost three and drawn one of their four league games played on the road this season. With a bad offensive and defensive line-up, they haven’t been able to win on the road in a long time. As a result, we’re betting on Degerfors to win this match when they face Helsingborg in an Allsvenskan match on Sunday. 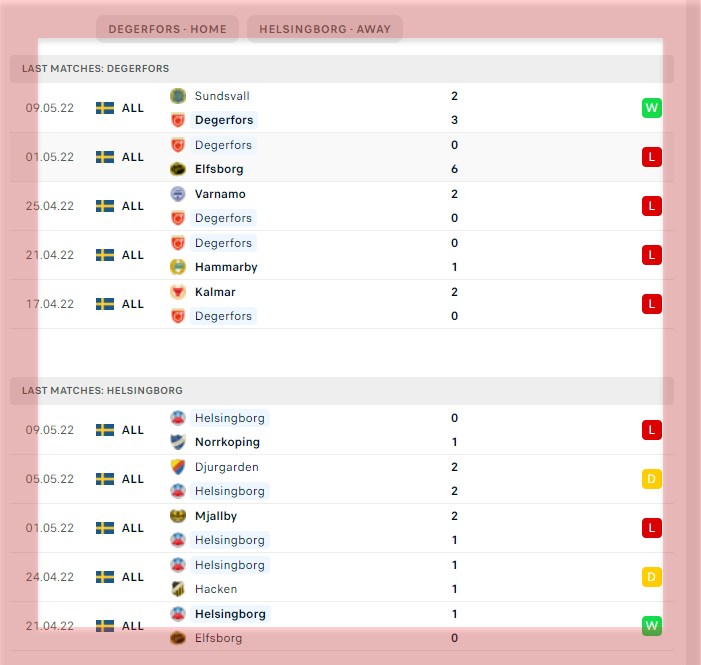