Degerfors vs Elfsborg – Preview and Prediction

Degerfors vs Elfsborg – In order to get their first point in the Allsvenskan, Degerfors will play Elfsborg on Sunday.

Seventh-placed Elfsborg has 7 points from five games, which is good for seventh place on the list. Until now, they have won and lost twice. Last year, the visitors came in fourth place. They won more games than both their draws and losses when combined. Even though they had a bad start to the season, they can get back in the game at any time.

Their last game was a 3-1 victory over Sundsvall. The visitors will be coming into the game after that. There have been seven goals scored against Elfsborg in their last six games. This suggests that the back line needs to get better.

On the other hand, Degerfors is at the bottom of the table with no points at all. They are in the 16th place on the table. So far, they’ve lost all five of their games. The hosts have let in 10 goals and only scored twice so far.

Against Varnamo, Degerfors lost by a score of 2-0. This was their fifth league loss in a row. They haven’t scored in the last three games, and we could see this run of bad luck keep going. Hosts also narrowly avoided relegation last season, but it was a close call.

When Elfsborg scored 10 goals in three straight games, they won the game. Degerfors only won one of their five games. Last month, these two teams played each other in the third round of the Svenska Cup. Elfsborg thrashed them by five goals.

Degerfors hasn’t won at home in their last two league games. They even didn’t score last time when they played at home. The team has lost every game so far this season.

They haven’t won away from home in their last two league games. But they’ve drawn a game away, and it looks like they have the courage to fight. Even though they didn’t start off well this season, compared to how they did last year, they are still one of the best teams in Allsvenskan.
It looks like the visitors will win this Sunday. This is how things are now.

Degerfors vs Elfsborg – Head To Head 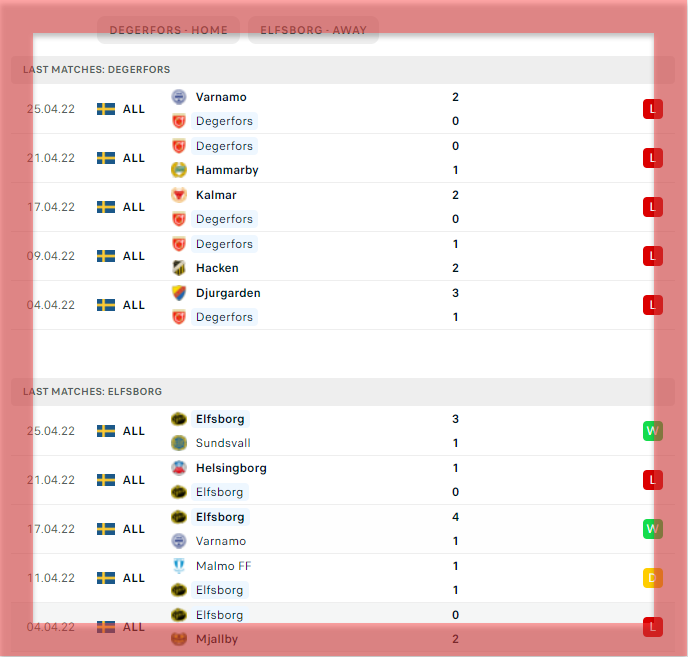