Cuiaba vs Athletico Paranaense –  Cuiaba, on a four-game losing streak, will host Atletico PR in the 8th round of Brazil Serie A this week. This Sunday, these two teams will face off at Arena Pantanal.

A total of 9 points from seven games has Atletico PR in 12th place in the standings. They won three games and lost four times. Currently, the hosts are in the final qualifying slot for the Copa Sudamericana, although they’ve had an inconsistent season.

As the visitors, you can expect them to be fresh off a 2-1 win over Ava in their last Serie A match. Luiz Scolari’s Atletico PR have scored 10 goals in their last six games, giving them an average of 1.67 goals per match. Winning and losing games in an erratic fashion this term.

Cuiaba, on the other hand, is 16th in the standings after accruing 8 points. After seven matches, they each won and drew twice, while losing three times. In the last four league games, they’ve gone without a win, and their offensive side appears to be lacking in quality.

Cuiaba is gearing up for this match following a 1-1 tie with Internacional in Serie A. They haven’t displayed defensive tenacity in recent games very often. As a matter of fact, they’ve been outscored 10-3 in their last six meetings.

Only twice have these two teams come out on top, and both of those victories were shared. Both of their previous meetings ended in a 1-0 victory for one team. It was Atletico PR’s first h2h win since December of last year.

At home, Cuiaba has lost five of its past six games in all competitions. But they come here on the back of 2-game unbeaten run. While they haven’t yet won a home game this season, they have beaten this opponent once already.

Meanwhile, Atletico PR lost all of their 3 away matches played so far and they have shown no improvements on-road. But they won the last meeting against this rival. 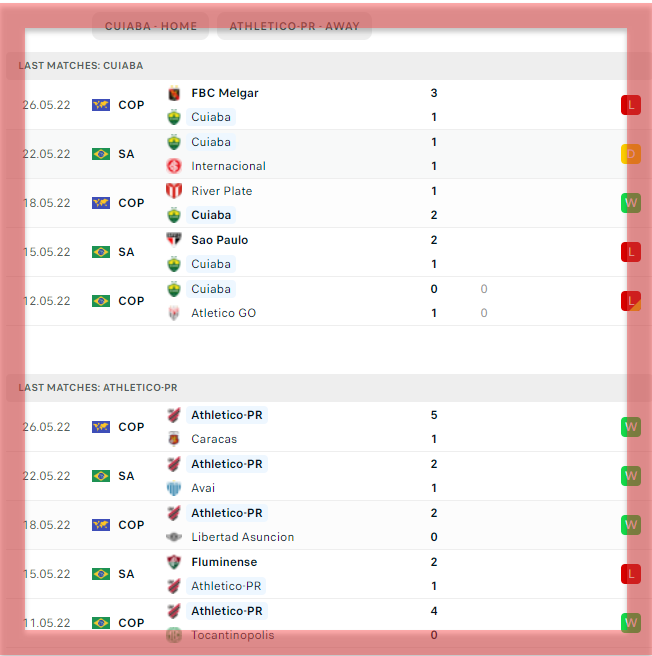