Crystal Palace vs Southampton – Palace has struggled to establish consistency on the road, but their strong home performances more than make up for it. Southampton, on the other hand, has struggled this year, both at home and away.

They were able to win just once over the entire campaign, and only one of the three victories occurred in the previous five matchdays. Furthermore, they were only outscored by three teams in the whole league, and two of those teams are ranked last in the standings.

Aside from their matches against Leicester and Bournemouth, two of the poorest clubs in the Premier League this season, they have a 100% losing record on the road.

In contrast, Palace only suffered four losses throughout the current English top flight season. These defeats came at the hands of powerhouse teams in the Premier League, including Manchester City, Arsenal, Chelsea, and Everton.

In the previous five matchdays, the team had only suffered one loss, which was to Chelsea, the two-time champion of Europe. Additionally, Palace has a strong head-to-head record against this adversary throughout the years, and all of these factors point to one clear conclusion: Palace is the favourite this Saturday at Selhurst Park.

Palace prevailed 1-2 in the most recent match. Three or more goals were set for the last three encounters. The previous time these two faced off on this field, the score ended in a 2-2 draw.

Two years have passed since the visitors triumphed here. In the previous nine months, Palace only suffered losses to Chelsea and Arsenal at this location. Since then, they have developed a history of making up for their road struggles at home with successful performances.

Although they are now ranked 13th in the table, they are quite optimistic about moving up six spots with a surplus of just three points. In contrast, Southampton has a 100% losing road record, with the exception of their matches against Leicester and the ineffective Bournemouth.

Additionally, they have had issues with defence since the beginning of the year, and to make matters worse, they have a dismal head-to-head record against this opponent. 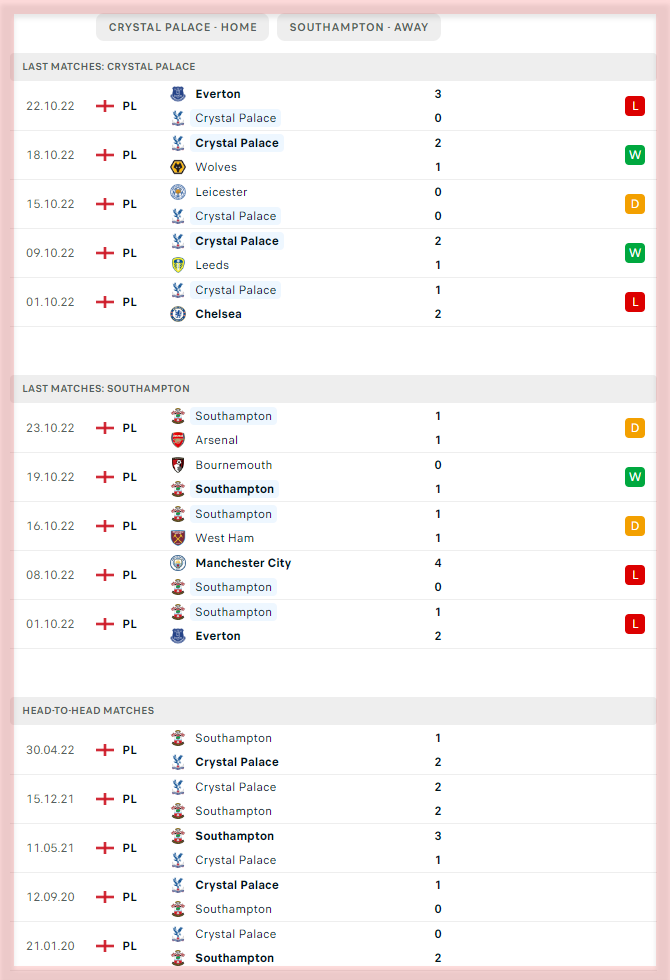