Crystal Palace vs Everton – Everton’s place in the English Premier League is in jeopardy, hence they may not be totally committed to advancing further in the FA Cup. The team is currently 17th in a table of 20 and just a hair above the relegation cut-off as the season nears its end.

All of their efforts will be focused on avoiding a relegation in the remaining weeks of the campaign.

And Crystal Palace should take advantage of this opportunity. They’re in a good spot in the Premier League’s mid-table. Both relegation and a European spot are out of the question for them.

As a result, they were able to play without a lot of pressure, and this upcoming match is a possibility for them to go to the final four of the competition, which would be a major accomplishment for the group.

Crystal Palace’s 0-0 draw with Manchester City in the last match-day at Selhurst Park has boosted their confidence. They also have a five-game winning streak under their belt and have been unbeatable in 10 of their previous 12 games.

Everton, on the other hand, have lost seven of their last eleven games overall and are winless in their last four road games. Also keep in mind that they’d lost 10 of their previous 13 excursions on the road.

With these considerations in mind, expect a hard-fought victory for Crystal Palace on Saturday night at Selhurst Park. Against Liverpool and Chelsea, Crystal Palace has only lost twice in their last 12 games across all competitions.

In contrast, Everton has not won a game on the road since August. In reality, other from three draws, they have a 100% losing record while on the road. 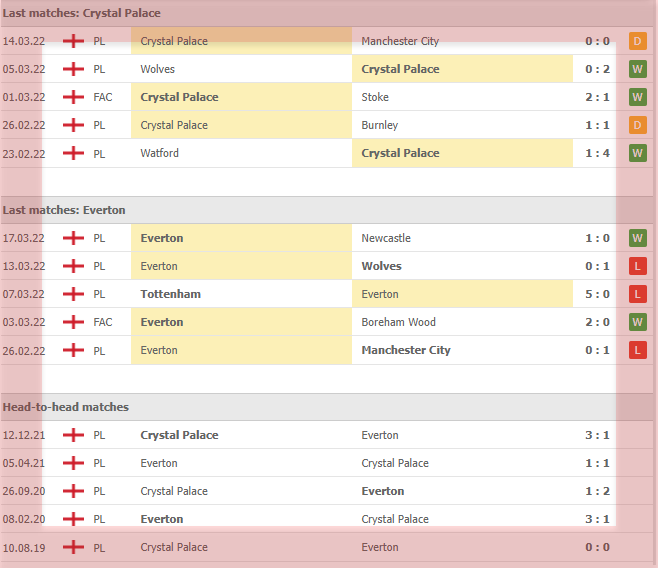