Crystal Palace vs Chelsea – Chelsea return to Premier League action on Saturday with a London derby against Crystal Palace at Selhurst Park, fresh off being crowned world champions for the first time in their history.

Chelsea will play their first league encounter in nearly a month, but they will face a Palace side that has yet to win in the Premier League this season.

There are those who criticize the Club World Cup, but try telling that to Thomas Tuchel and his team after their successful return from Abu Dhabi.

Kai Havertz, who scored the winning goal in last season’s Champions League final, gave the club another trophy with a penalty late in extra time in their final against Palmeiras on Saturday, securing a 2-1 victory.

The Blues have now won two trophies this season, with an EFL Cup final against Liverpool at the end of the month, a Champions League last-16 encounter against Lille, and the Premier League still mathematically within reach.

The Eagles, on the other hand, have only won one of their previous 16 Premier League London derbies, and they go into Saturday’s game in desperate need of a win.

Patrick Vieira’s team has dropped to 13th place in the rankings after taking just three points from the 15 available so far this season.

Palace will not be looking fearfully over their shoulders just yet, as nine points separate them from the relegation zone, but the improved form of many of those ahead of them has heightened the desire to return to winning ways.

Reece James travelled to Abu Dhabi with the rest of the Chelsea squad, however he was unable to participate in the Club World Cup due to a hamstring injury.

The full-back is still doubtful for this encounter, but he is nearing a comeback and might be included in the matchday squad at Selhurst Park.

Conor Gallagher, a Chelsea loanee and leading scorer, will miss the game since he is unable to play against his parent club.

Nathan Ferguson is anticipated to remain out until April, while Cheikhou Kouyate, who helped Senegal win the Africa Cup of Nations, should be available again.

Marc Guehi, a centre-back, is expected to start against his previous club, while Michael Olise, who has been directly involved in seven goals in his last seven games, will be hoping for a starting spot. 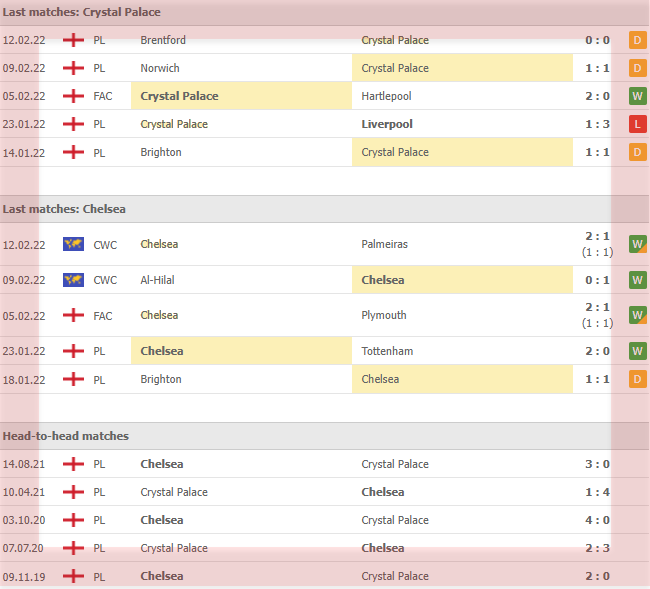