Croatia vs Belgium – Belgium could be eliminated from the 2022 World Cup after Thursday’s match against Croatia. The Red Devils are third in their group, one point behind the Checkered Ones and Morocco.

After drawing 0-0 with Morocco in their initial Group F match, Croatia defeated Canada 4-1 on Sunday to bolster their last-16 ambitions.

Alphonso Davies put Canada up after two minutes, but Andrej Kramaric and Marko Livaja scored to flip the game around. Lovro Majer came off the bench to seal the win in added time and put Croatia in charge of Group F.

Indeed, Zlatko Dalic’s team now sit at the summit of their group with four points, slightly above Morocco in second on goals scored, and the 2018 World Cup runners-up require just a draw against Belgium to clinch their place in the knockout rounds.

A win will guarantee first place if Morocco loses to Canada by fewer goals. Croatia, rated 12th by FIFA, has won their past eight matches across all competitions and only one of their last 18 internationals since Euro 2020.

Croatia haven’t beaten Belgium since a 1-0 friendly victory in 2010, but spirits are high in the camp and Dalic and co will feel they have a strong opportunity of capitalizing on their competitors’ bad form.

Four years after finishing third at the World Cup in Russia, Belgium’s golden generation faces an early exit in Qatar.

The Red Devils were fortunate to beat Canada 1-0 in their initial Group F match, but they were downed 2-0 by Morocco on Sunday thanks to late goals from Romain Saiss and Zakaria Aboukhlal.

While riots broke out in Brussels after the match, sources say Romelu Lukaku had to break up a post-match dressing room brawl between Kevin De Bruyne and Jan Vertonghen.

De Bruyne’s accusations that he and his teammates are “too old” to win the World Cup haven’t benefited Belgium, and they’re odd because Brazil and Argentina have older squads on average.

Roberto Martinez is under pressure to get his side out of the group, and Belgium needs a win against Croatia to advance. If Morocco loses by three or more goals versus Canada, a draw will be enough for second place.

Belgium, ranked second by FIFA, have lost three of their past four games in all competitions, but they are unbeaten in their last three encounters with Croatia, including a close 1-0 friendly win in June.

Dalic is unlikely to make many changes to his starting lineup after Sunday’s success, thus Livaja might continue as the centre striker between Kramaric and Perisic.

Real Madrid captain Luka Modric is one booking away from suspension but is expected to start with Mateo Kovacic and Marcelo Brozovic. While Croatia merely needs a draw to advance, Belgium must win on Thursday to avoid an early exit.

Josip Juranovic and Borna Sosa hope to keep their full-back spots ahead of Josip Stanisic and Borna Barisic. Amadou Onana is suspended for Belgium, thus Youri Tielemans will replace him alongside Axel Witsel.

Romelu Lukaku, who has had hamstring and thigh issues this season, came off the bench against Morocco. Martinez hopes the striker will be ready to start against Croatia.

Michy Batshuayi is still the most likely choice to head the Red Devils’ assault, while De Bruyne and Eden Hazard should keep their spots despite struggling in Qatar.

Timothy Castagne may continue in the back three alongside Toby Alderweireld and Jan Vertonghen, shielding goalkeeper Thibaut Courtois for his 100th international appearance.

Belgium has individual talents who can make the difference when it matters, but Dalic’s unified Croatian side has looked stronger after the first two group matches, and we can see the 2018 finalists finishing group stage on top. 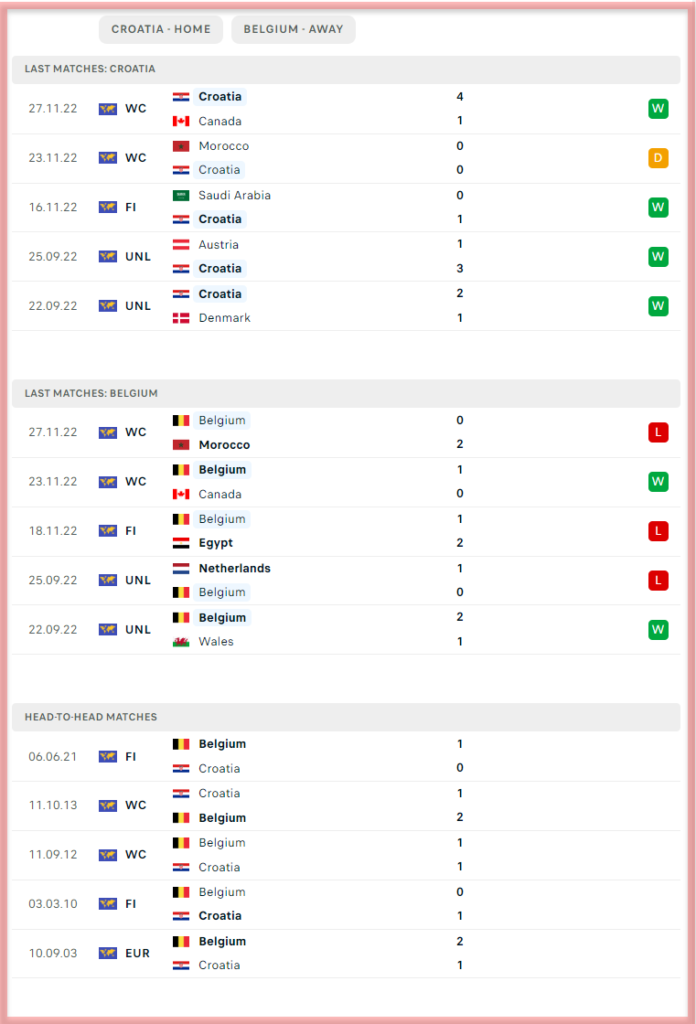