Cremonese vs Udinese – Preview, and Prediction

Cremonese vs Udinese – With only two points from their last three Serie A games, Udinese appear to be running out of steam. On Sunday afternoon, the Andrea Sottil-led squad will travel to Cremona to take on the league’s worst team in Gameweek 12.

After losing 0-1 to fellow strugglers Sampdoria last Monday, Cremonese became the only winless team in the entire league. With only four points after eleven games, Massimiliano Alvini’s team is last in Serie A.

The home team’s goal total is just 9 for the season. In the previous round’s game against Le Samp, they had 21 shots but were unable to score. Therefore, we think this is a fantastic opportunity for Udinese to bounce back from their shocking home loss to Torino (1-2) seven days ago.

Sottil’s team is still in the Serie A playoff hunt, sitting in the sixth spot. They had a rough stretch of games, with Atalanta and Lazio in two of the last three rounds. The battle of the Cremonese and the Udinese Head-to-head

In their last six league games, Udinese have only one clean sheet. In their previous two Coppa Italia matches against Torino and Monza, they gave up a total of six goals. This is why we think they will give in once more.

Based on the teams’ prior results, the visitors are still heavy favourites. Taking Udinese to win and both teams to score is a solid bet, and it’s now paying 3.60 to do so. Udinese winning by a score of 1-2 is a correct score bet that pays off at 8.50.

Cremonese vs Udinese – Head -to- Head 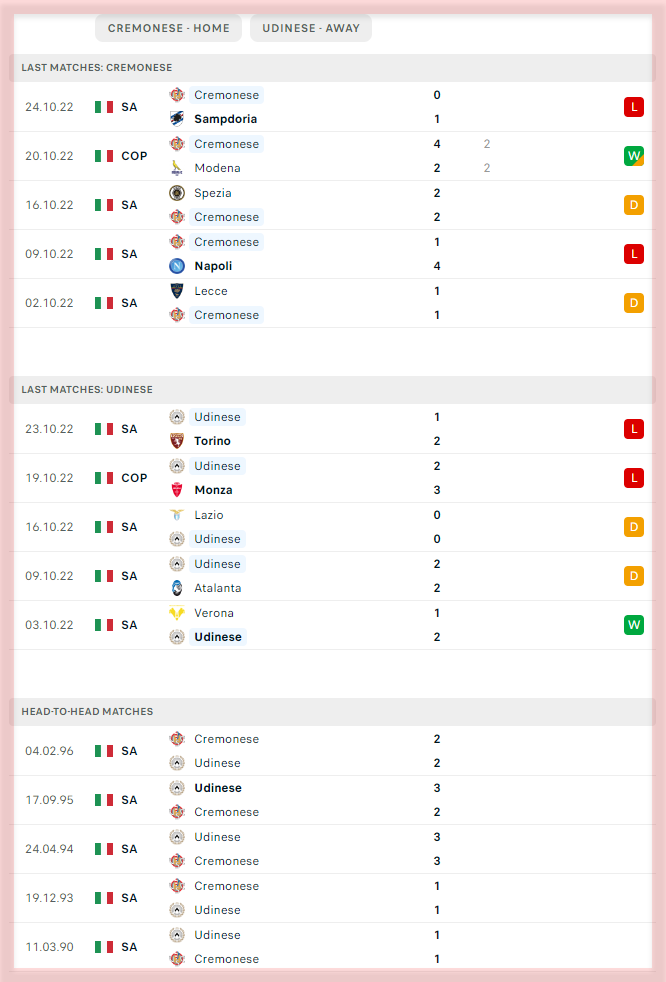