Cremonese vs Sassuolo – Preview and Prediction

Cremonese vs Sassuolo – After losing 3-1 to Inter Milan in their previous Serie A match, Cremonese will be hoping for a better outcome in this contest.

Cremonese had 46% of the possession in that game and 4 of their 11 shots were on goal. David Okereke was the only Cremonese player to score (90′).

In five of the last six games in which Cremonese participated, three or more goals per game were scored. In these games, their opponents scored 12, while Cremonese only managed to score nine goals. However, it’s unlikely that pattern will continue into this game.

Prior to this match, Cremonese had gone two league games without a home victory. Sassuolo and AC Milan played to a scoreless draw in their most recent matchup in Serie A.

Sassuolo had 38% of the possession in that game and made 8 efforts on goal, scoring on three of them. AC Milan, on the other hand, had 10 attempts at goal with 2 of them being successful.

Sassuolo, led by Alessio Dionisi, has reason to be happy after scoring five goals in their last six games. The total number of goals scored against them throughout the same time span is 11. Sassuolo hasn’t won away from home in their last two league games coming into this match.

With a nearly totally healthy roster of players, Cremonese manager Massimiliano Alvini just has to worry about one player’s condition. Due to a shoulder injury, Marco Carnesecchi will not play. Alessio Dionisi, the Sassuolo manager, does not have access to the entire roster.

We believe that Sassuolo will likely maintain control for an extended amount of time and should be able to capitalise on a number of their opportunities.

Cremonese, in comparison, might find it difficult to score, though we do see them succeed at least once. We predict that Sassuolo will end up with a pretty comfortable winning margin of 1-3.

Cremonese vs Sassuolo – Head -to- Head 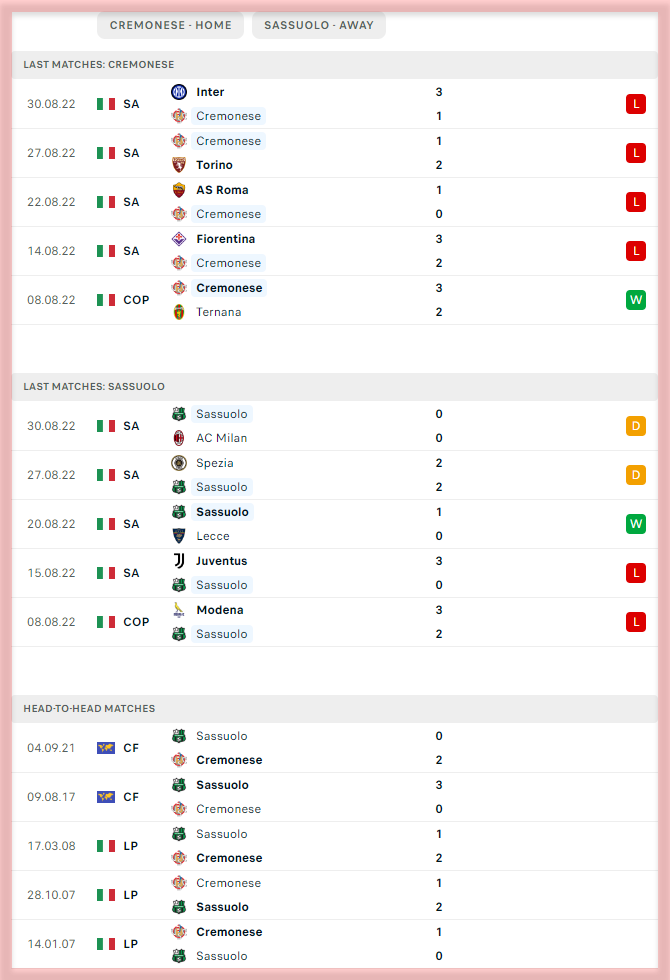