Cremonese vs Inter – Cremonese get ready for this game after a 1-1 Serie A tie with Bologna. In that game, Cremonese had 32% of the possession and 2 of their 9 shots on goal were successful.

David Okereke (50′) and Vlad Chiricheş (54′ Own Goal) scored for Cremonese. Bologna, their adversaries, had 21 shots on goal with 8 of them being on target.

Cremonese haven’t kept a clean sheet in recent years very often. The fact that Cremonese have been scored against in 6 of their past 6 games while also allowing 11 goals will be of concern to them.

Whether or if that trend can continue in this game needs to be determined. Prior to this match, Cremonese had lost their previous ten league games at home without a victory. There must be a change.

Inter Milan will be looking to avenge a setback in their most recent Serie A match against Empoli. Inter Milan possessed 49% of the game’s possession and 16 shot attempts, only one of which was successful.

Empoli made 13 goal-scoring attempts, eight of which were successful. Empoli scored through Tommaso Baldanzi (66′). The Inter Milan defense has put in a string of strong efforts, and as a result, they have only given up 4 goals altogether in their last 6 games.

Their own assault force has scored nine goals over that time. Inter Milan has gone undefeated in their last two away league games entering this matchup.

For Cremonese manager Davide Ballardini, Christian Acella and Luka Lochoshvili will not be participating due to unknown injuries. Due to his suspension, Charles Pickel will be unable to participate in this game.

Simone Inzaghi, the manager of Inter Milan, does not have access to the entire roster. Samir Handanovic (muscle injury), Marcelo Brozovic (calf injury), and Dalbert (cruciate ligament injury) will not play in this game.

Due to his suspension, Milan Skriniar will be unable to participate in this game. We believe that Cremonese can score against this Inter Milan team in this particular game, but we doubt that they will score as many goals as they might allow.

Checking on the latest odds for this match in the WDW market, backing Cremonese is available for 6.15, a bet on a draw is 4.48 and staking on victory for Inter Milan comes in at 1.5. They’re the best bets offered at present. 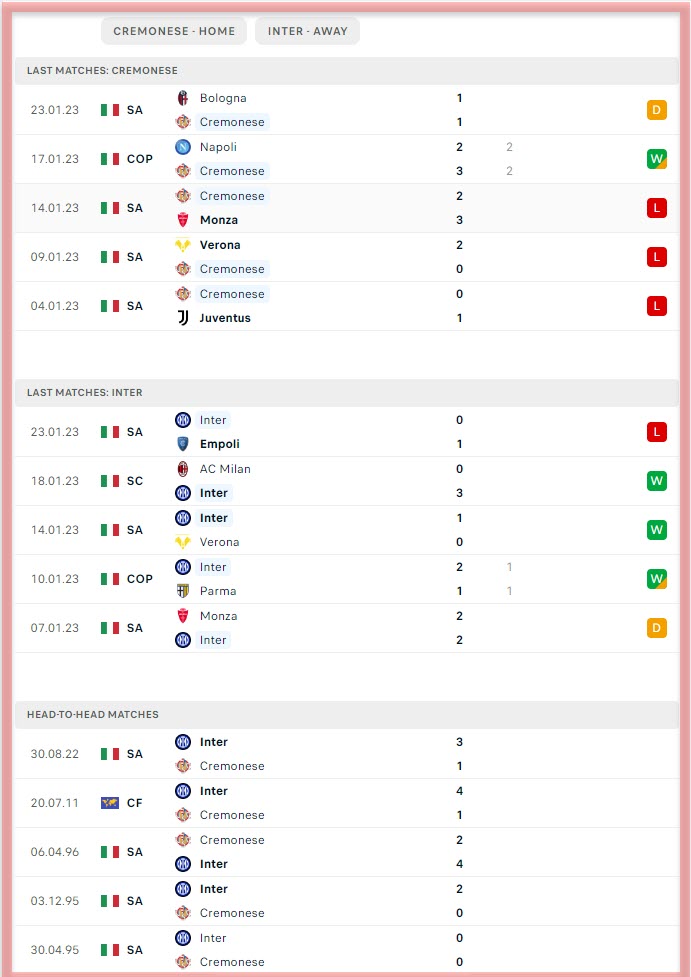