Coventry vs Blackpool – Preview, and Prediction

Coventry vs Blackpool – This Saturday’s matchup between Coventry and Blackpool at the Coventry Building Society Arena is a crucial one. The host has recently made remarkable development. Mark Robins’ team made up for their 1-0 loss to Burnley earlier this month by winning their following three games. among them was a 1-0 victory over Sheffield United.

They are currently unbeaten in their past four games for a squad that has been at the bottom of the standings since the start of this season. They managed to hold Rotherham to a 2-2 draw in their previous league game. Viktor Gyökeres’ game-winning goal gave Mark Robins’ team a point in that contest.

The team is currently ranked twenty-second on the table as a result of their recent strong performances. Keep in mind that they are only two points behind the visitors right now. Blackpool’s recent performance demonstrates that they are on the right track as they strive to crack the top ten on the table. In their last five games, they have only lost once.

Even though Preston has the greatest defensive record this year, the group led by Michael Appleton was able to defeat them by a score of 4-2. Jerry Yates scored twice despite prior criticism for his goalless performance against Hull City.

Given that Hull City had just defeated Michael Appleton’s team 3-1, this win was extremely important. In his last two games, Gustavo Hamer has scored twice. He is one of the key players for the host this season. Three of the four games the host has won so far this month alone have been triumphs. Interesting to note is that Blackpool is only second to Hull City in terms of goals allowed.

Our initial prediction is that Coventry will triumph by a score of 2-1; the associated odds are set at 9.00. The last time Blackpool celebrated a victory at Coventry Building Society Arena was more than three years ago. The odds for our next prediction for this game are Both Teams to Score at 1.83. Both of these clubs have scored a total of seven goals in their last two head-to-head games.

Coventry vs Blackpool – Head To Head 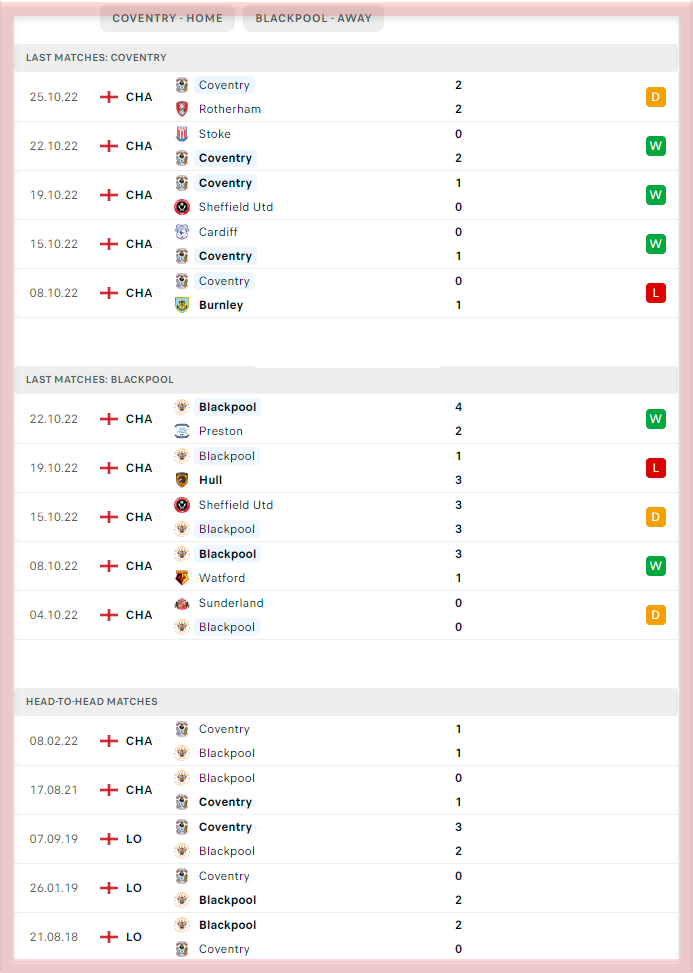