Costa Rica refused to allow their seven-goal drubbing by Spain affect them as they faced a Japan team that had beaten Germany four days earlier, but it was Japan who would be humbled.

Keysher Fuller’s 81st-minute strike met Japan goalkeeper Shuichi Gonda’s gloves, but he could only help the ball into the top corner, sparking joyful scenes for Costa Rica, whose fate is now in their own hands.

Costa Rica will advance to the knockout stages for just the third time in their history with a win over Germany this week. They are now in third position with three points, tied with second-placed Japan and one behind Spain.

A draw will suffice for Luis Fernando Suarez’s men if Spain beats Japan, whose goal difference of 0 is significantly superior to Costa Rica’s -6, but defeat would mean they could not improve on their 2014 quarterfinal result, or 1990 last-16 exit.

Costa Rica last won consecutive World Cup matches in 2014. Six of the current crops participated when Los Ticos beat Italy 1-0 in 2014, but they face a different challenge this week.

Niclas Fullkrug scored a tremendous goal in the 83rd minute to rescue a point for Die Mannschaft, who also had an Antonio Rudiger goal called out for offside.

Germany must win to break into the top two on Thursday, and a win for Flick’s team coupled with a Spain win against Japan would ensure the one-point basement side go to the last 16.

Should Spain and Japan draw, Germany will need to win by at least two goals to pass Japan and eliminate Spain would require a five-goal swing.

Two wins from 10 in all tournaments will not inspire confidence in the Mannschaft ahead of such an important match, when a draw or defeat would send Germany to consecutive group-stage exits for the first time in their illustrious history.

Suarez hoped to nominate an unchanged lineup for Costa Rica’s last group game, but Francisco Calvo was sent off against Japan and will be suspended.

Daniel Chacon, 21, bolstered the backline late in that game, but Juan Pablo Vargas’ experience may be favored against the Germans.

Jewison Bennette was dropped to the bench at the weekend, but neither Gerson Torres nor Anthony Contreras impressed. Costa Rica’s strikers lack goal threat, which could cost them against an out-of-sorts Germany.

Leroy Sane returned to the Germany squad after a knee injury to play as a substitute in the draw with Spain. Flick faces a huge dilemma in attack after Fullkrug’s exploits, who is fighting Thomas Muller for a starting spot.

Ilkay Gundogan would drop into a deeper role if Sane is recalled, squeezing Leon Goretzka out of the team. Lukas Klostermann and Nico Schlotterbeck are vying to replace Thilo Kehrer on the right.

Sane and Fullkrug should enable Flick’s team lay down an early marker at the Al Bayt Stadium, and we expect Die Mannschaft to tear past the Ticos’ defense and strive for a top-two finish, leaving their fate in the hands of Spain and Japan. 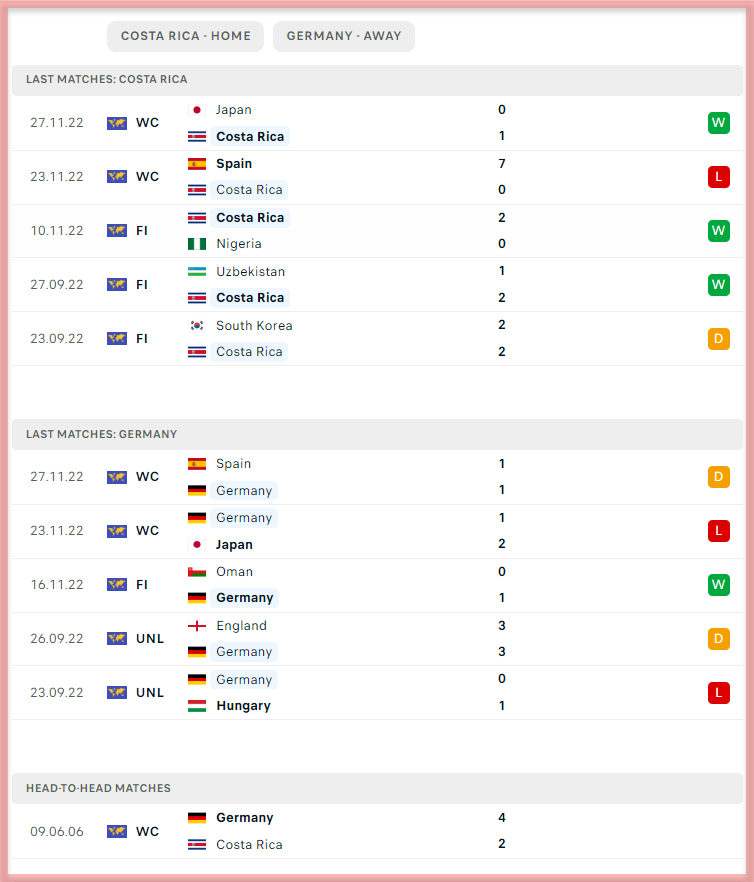