Corinthians vs Botafogo – Preview, and Prediction

Corinthians vs Botafogo -This weekend is Gameweek 20 of the Serie A, and top-spot contender Corinthians will visit Botafogo.

These two teams are separated by nine positions and a difference of 11 points. This Saturday, watch as these two teams square off at Neo Quimica Arena.

With 35 points after 19 games, Corinthians is in second place. They were successful in the league 10 times, drawing 5 times, and losing 4 times. To pass Palmeiras for first place, the hosts need 5 more points.

The hosts are looking for another win after beating Atletico Mineiro 1-2 in Serie A. Vtor Pereira’s team has scored 1.17 goals per game in their last 6 games (7 on target).

On the other side of the table, Botafogo holds down the 11th spot with 24 points. They won 7 times, drew 3 times, and lost 9 times in the league out of the 19 games they played.

They are tied with Ceara in the Copa Sudamericana promotion zone on points. The opposition will enter the contest fresh off a 2-0 league victory against Atletico PR.

In recent matches involving Botafogo, it has been increasingly common for at least one team to go scoreless. Their most recent six outings reveal that this has occurred six times.

In their last 21 Serie A home games, Corinthians has not suffered a loss. They have also not lost in the previous seven head-to-head matches played on their home field.

The last two matches have also been victories for the hosts. In contrast, Botafogo has lost all seven of their league games when they have faced this opponent away from home.

Additionally, they were defeated 2-0 in their last two away league contests. Given their previous head-to-head statistics and current record, we believe a home victory is likely to occur. 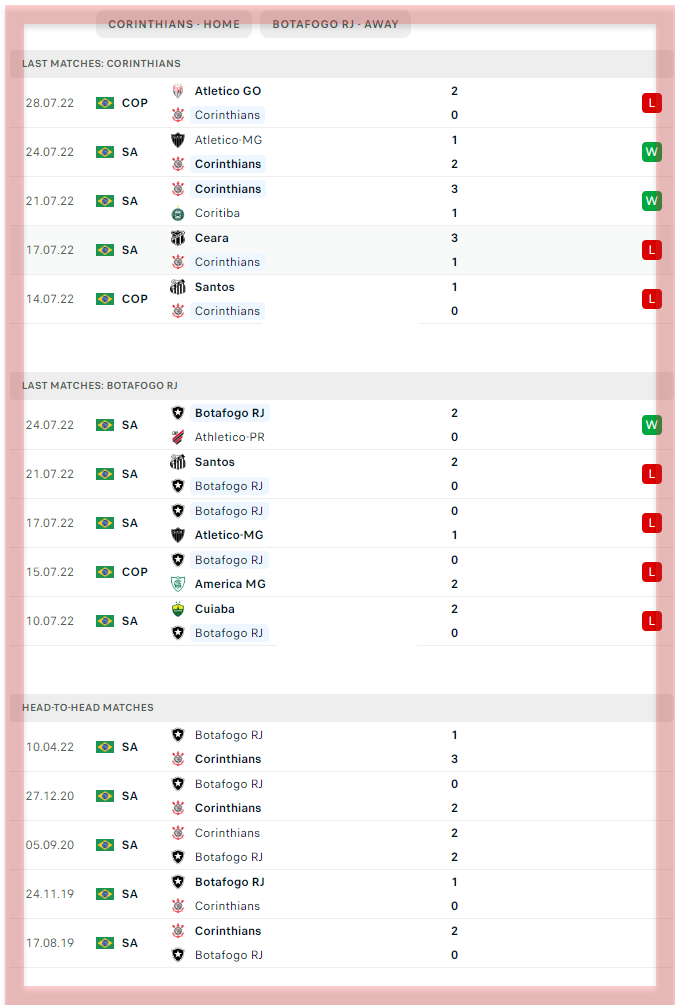