Colorado Rapids vs Nashville SC – Colorado’s recent performances have been a bit of a letdown. Since the end of March, the team had been having some problems in their matches. Even in recent matches, the squad has been unable to maintain a winning streak, winning and losing one after the other. With 18 points from their matches, Colorado is ranked ninth in the Western Conference.

So far this season, Nashville has had a mixed bag of results in their games. With thirteen matches under their belts, the team has five victories, four ties, and four losses. However, the teams’ inconsistent results have placed them in sixth place in the league table, with 19 points earned from their matches. The club is now undefeated in their last two games. Nashville’s most recent encounter was against Atlanta United. Both teams scored two goals in the second half, resulting in a 2-2 FT score.

This season, both the Colorado Rapids and the Nashville Predators have been inconsistent. Both sides have a total of three draws from their previous encounters. In the majority of their recent meetings, both teams have scored and conceded.

In the forthcoming encounter, the Colorado Rapids will have the advantage of playing at home. This season, the squad has not lost a single match at home in the MLS. The hosts are currently on a three-match winning streak and have also kept clean sheets in the match. Nashville, on the other hand, has lost all three of their games this season. Only three of the team’s nine road trips have resulted in victories. According to the stats, Colorado Rapids will most likely win this match. We may also expect Colorado to keep a clean sheet at the end of the game. 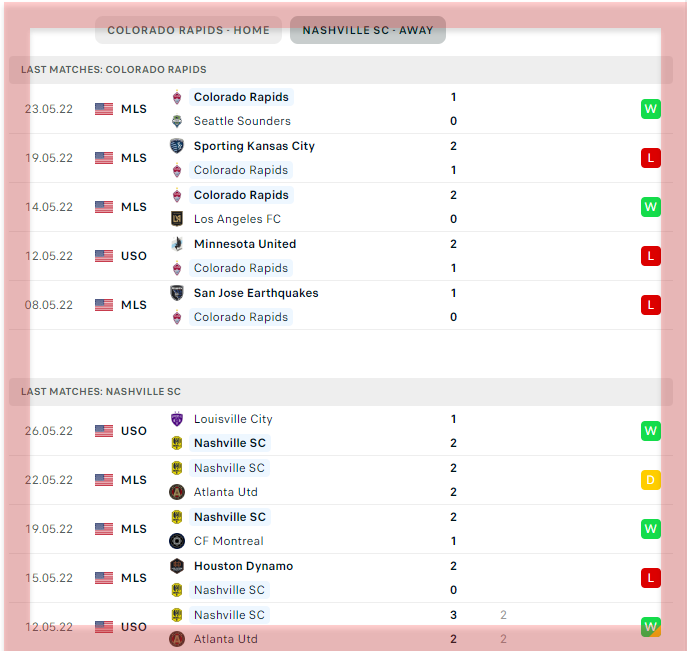