Colon vs. Cerro Porteno – Cerro Porteno is looking to keep its unblemished start against Club Olimpia intact. Their next opponent is Colon Santa Fe, who visit Paraguay on Tuesday night. The away team opened their campaign with a 2-1 home win over Penarol, which was surprising given Penarol’s apparent superior experience in this match. Cerro Porteno will attempt to defend this week, while Colon will look to attack.

We expect a competitive contest with neither side having a clear advantage. This will lead to a cautious game throughout the 90 minutes, especially if the first half ends 0-0. We will bet on Under 2.5 goals in this game as we anticipate it will either result in a 0-0 tie or a 1-1 draw following some disciplined defence from both sides. You can also bet on a Colon double chance, as we do not expect them to lose this game, even though they are away.

Cerro Porteno will be healthy and free of suspensions for this encounter. They will be trying to extend their unbeaten run to four games, but a draw appears likely given Colon de Santa Fe’s superior results in this competition. The Argentines are without versatile midfielder Cristian Vega, who can play both as a box to box and centre holding midfielder.

Vega had a season-ending cruciate ligament injury. Juan Mino, who also plays in midfield (typically on the left flank), is also out due to an ankle injury. 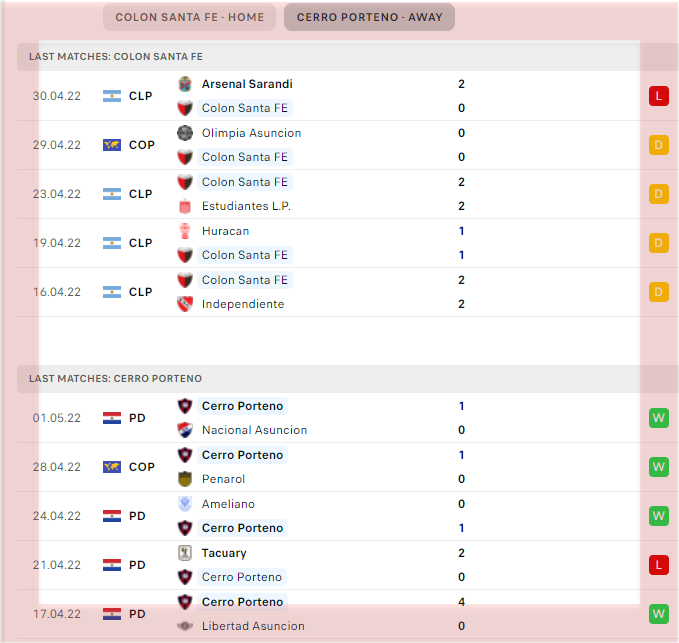