Club Bruges vs Anderlecht – Club Brugge will face Anderlecht in the last round of the Championship Play-Offs, where the title race will be decided. This Sunday, these two teams will face off at Jan Breydel Stadion.

The defending Belgian champions are on their way to reclaim their title. In the Championship Play-offs, Club Brugge has never lost a game, winning four of the five matches. With an excellent +6 goal differential, they are 3-points ahead of Union Saint-Gilloise on the standings.

The Blue-Blacks overcame Antwerp 3-1 on Sunday to extend their unbeaten streak to 13 games, with 12 wins and one draw against Anderlecht. Their recent results prove that the Club Brugge defence deserves a lot of respect, since they have only conceded one goal in their last six matches.

Anderlecht, on the other hand, is in third place in the league table with 39 points and has qualified for the Europa Conference League. They won and lost twice in the Play-offs, but their goal ratio indicates that they can score, while they concede more frequently.

Anderlecht are coming off a 0-2 loss to Union Saint-Gillois at home on Sunday, which brought the title chase to the final day of the season.

This occurred after a three-game winning streak. In their last six games, Vincent Kompany’s troops have been rewarded seven times for their efforts on goal.

Their last five head-to-heads have all ended in stalemates, and both teams scored in five of their last six encounters. They played earlier this month and were held to a scoreless draw.

Club Brugge has won their previous five home games in a row, with four clean sheets. The table-toppers need a draw in their final game of the season against Anderlecht, who are three points ahead of Union Saint-Gilloise, who have kept them at bay for the bulk of the season.

Anderlecht, however, has lost three of their past five away games in all competitions, and it is unlikely that they will be able to halt Club Brugge today. Furthermore, their last five head-to-head meetings have all finished in draws, so taking the hosts at Draw no Bet looks like a good bet. 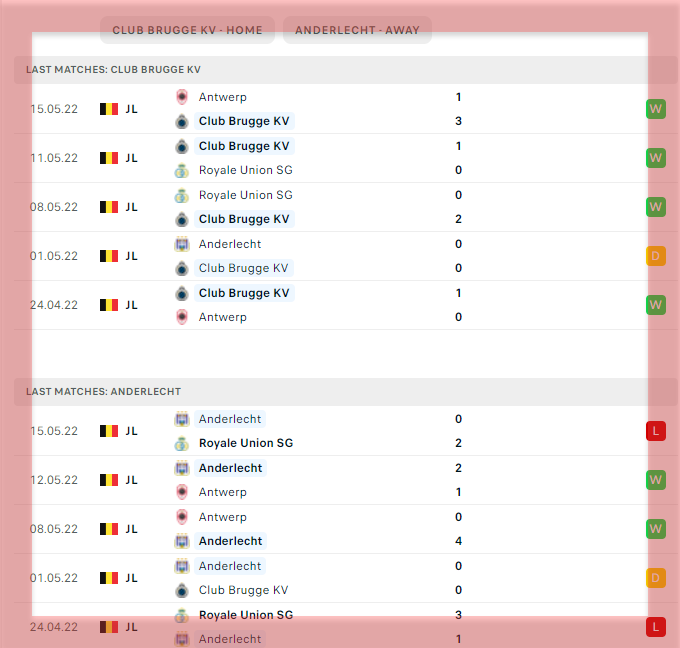