Chelsea Women vs Real Madrid – Chelsea Women will attempt to claim a 10th consecutive victory in all competitions when they face Real Madrid Women in Wednesday’s Champions League contest at Kingsmeadow.

The visitors, meanwhile, have also been in impressive form after losing only one of their 14 competitive matches this season.

Chelsea head into the midweek encounter in confident mood after claiming a ninth straight win in all competitions with a 3-0 victory over London rivals Tottenham Hotspur on Sunday.

Sam Kerr, Erin Cuthbert and Guro Reiten all found the net in the first half, and although they were unable to add to their tally in the second period, Chelsea cruised to a comfortable win that moved them to the top of the Women’s Super League table.

The Blues are also top of their Champions League group after edging out PSG by a narrow 1-0 scoreline, Chelsea thrashed Vllaznia 8-0 in their most recent Champions League outing, leaving them well-placed to qualify for the knockout stages.

As well as racking up eight goals in their home match against the Albanian champions, Chelsea have scored at least two goals in all five of their home games this season, and they will be looking to continue that impressive form against Real Madrid.

Real Madrid have the chance to claim consecutive victories after bouncing back from a 4-0 defeat to Barcelona with a narrow win over Sporting de Huelva at the weekend.

The Spanish side will now turn their attention to Wednesday’s Champions League game where they will be looking to maintain their unbeaten record in the competition this season.

After beating Sturm Graz, Manchester City and Rosenborg in qualifying, Real Madrid began the group stage with a 2-0 away victory over Vllaznia before they played out a goalless draw with PSG.

Although the visitors will have to be at their best to claim a positive result against the English champions, they can take confidence from the fact that they are yet to lose an away game this season.

Chelsea announced on Monday that Pernille Harder will be sidelined for an extended period after undergoing surgery on a hamstring injury that she picked up on international duty with Denmark.

Hayes could make a couple of changes to the side that beat Tottenham, with Niamh Charles and Fran Kirby in contention for starting berths.

Kerr will continue to lead the line for the Blues, and the Australia international will be looking to score in a seventh consecutive game for club and country.

As for the visitors, they could be without the services of Esther Gonzalez, Lorena Navarro and Claudia Florentino due to injury issues, while Marta Corredera is currently on maternity leave.

Misa dropped down to the bench for Saturday’s victory over Huelva, but the goalkeeper will return to the starting lineup on Wednesday.

Del Castillo scored her fifth goal of the season in all competitions at the weekend, and she will pose a goal threat from out wide against Chelsea.

Real Madrid are yet to lose an away game this season, but we think that their unbeaten run will come to an end against a Chelsea side that have won their last nine games in all competitions. 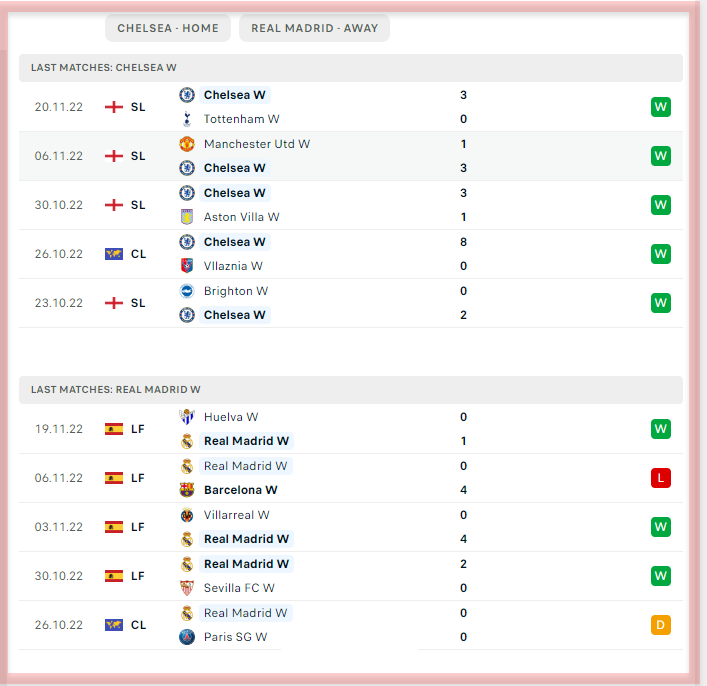