Chelsea vs West Ham – On Sunday afternoon, Chelsea will host West Ham United in a London derby in an attempt to win the Premier League.

Chelsea are five points ahead of fifth-placed Arsenal in the league. West Ham are seven points behind Tottenham Hotspur in fourth.

Despite having a game in hand, Chelsea are presently just five points behind fifth-placed Arsenal in the Premier League table.

The capital club have a game in hand on fourth-placed Tottenham and two over sixth-placed Manchester United, meaning they are still in contention to finish third, although they lost 4-2 to Arsenal on Wednesday night.

A 2-0 win over Crystal Palace last weekend qualified the Blues for the FA Cup final, but they have lost three of their past six games overall, including two at home against Brentford and Arsenal.

Off-field concerns are becoming a distraction, but the players must focus on what they can control this season, with seven Premier League games remaining and the FA Cup final against Liverpool next month.

It would be unfathomable for the Blues to finish outside the top four, having been in control of a Champions League spot for much of the year.

West Ham are seventh in the Premier League, two points behind sixth-placed Manchester United and five behind fourth-placed Tottenham, who have a game in hand.

The Hammers are unlikely to finish in the top four this season, but they may still qualify for next season’s Champions League by winning the Europa League.

West Ham have only won one of their last four Premier League games, and that was against Burnley at home.

Between now and the conclusion of the season, David Moyes’ team face Arsenal, Norwich City, Manchester City, and Brighton & Hove Albion, with three of those games likely to be crucial.

This is West Ham’s second league win over Chelsea, having beaten them 3-2 at the London Stadium in December and last winning at Stamford Bridge in November 2019.

Chelsea face a difficult contest after recent home defeats. West Ham have major defensive issues and will be focused on next week’s game against Frankfurt, but we think they’ll do enough to earn a point at Stamford Bridge. 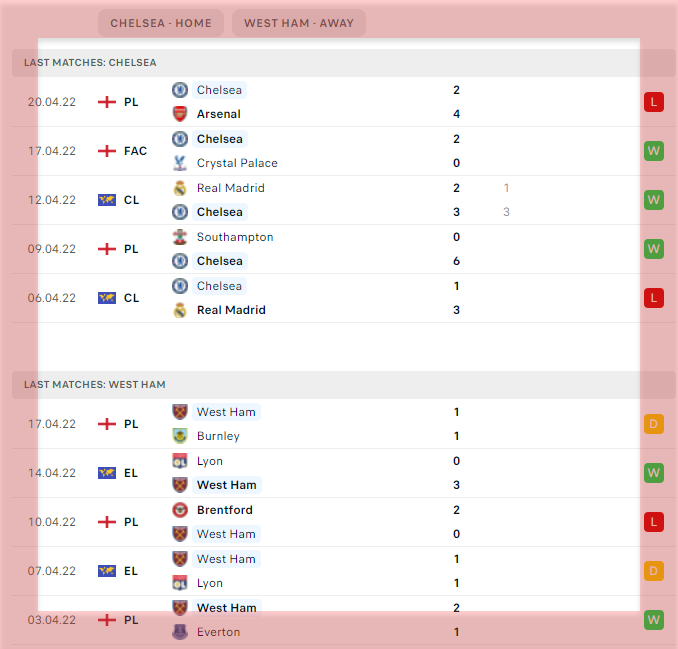